Our Sun has returned and it has been wonderful. Then Kurt and I celebrated the SUPER SUPER BOWL.  Tres Bistro had the whole bar reserved so we saw the first half at a hotel.  Then went to a sports bar for second half.  What a game. 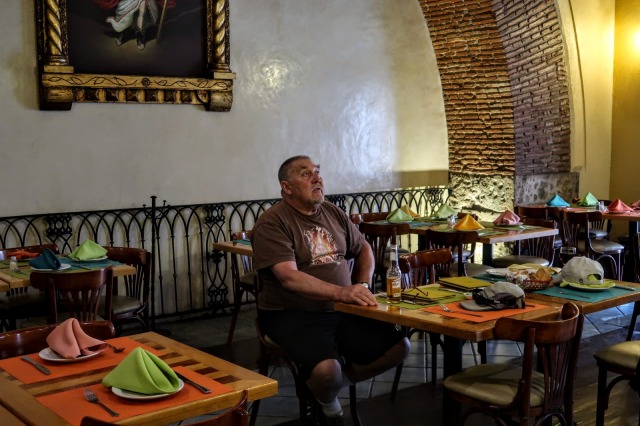 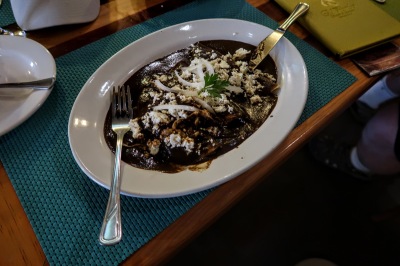 Today I played pool then went shopping for a light bulb. Kurt, my friend, laughed at me…
that’s it, your going to spend the day to get a light bulb!  Well it was one o’clock when I finished playing pool and had my sights set on Coppel, a local department store that google said was two minutes away.  Terry, another player, left at the same time and told me Coppel was on Colon, just across from the Zocalo and down some.  It had all kinds of lights…so it was on the way home so I agreed since it is a chain store.  I stopped at the Market and bought some Sylvia’s Pluma Cafe with Cinnamon ground into it. Then picked up some real PopCorn with no butter or Microwave nada.  After walking a half hour I stopped on Colon and asked a shopkeeper who told me it was back where I came from.  Google knows best.  I returned to find Coppel two minutes from the pool hall.  Then I find they don’t carry light bulbs at all!  The man directed me to an Electrical shop that did and another 1/2 hour in the opposite direction from home.  I found it and bought the light bulb. Now it was 2:45 so I decided to eat at Quinque, a popular Gringo restaurant that had lost it’s lease and moved.  It was now close by so I had the Chicken then took a taxi home.  So how long was it to shop for a light bulb…well it’s 4:30 now that I’m home. 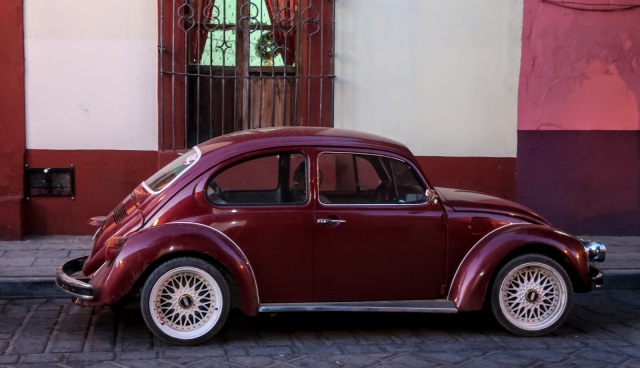 Tuesday I went to meet Lynn and Kurt for lunch at the Bakery and as I passed TX7 bar I heard Blues music.  Eric was auditioning with part of the Jazz Trio and got a gig for Wednesday. 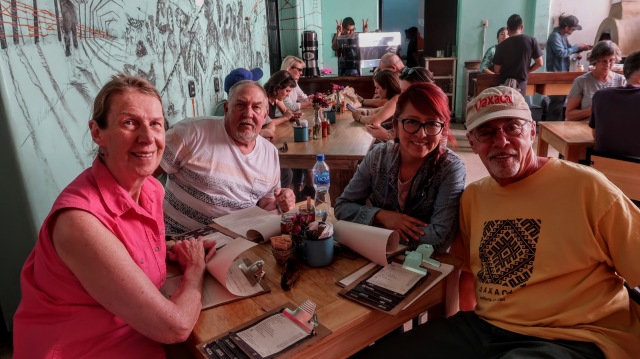 I met Gadi, Lynn and Kurt for lunch at the Bakery.
Zoe will meet me at the TX7  tomorrow night to enjoy Eric’s music.

Today I do nothing but play and attend the concert tonight.  I met Zoe and her friend Geronimo, a paratrooper in Vietnam when I was there.  They were friends from Salem Oregon and he was visiting.  The concert was great and a female singer joined for the set for a couple of songs.  I left after the first set.

I met Hector for lunch today at Terranova.  Darcy, Pat, his sister, Steve, a friend and a new traveler, Dan Keohiety from NM were all drinking beer next door.  Dan was on his way to Terra de Fuego and was an avid traveler who was on his 41 country.

Hector and I had a nice lunch and I stopped at the Amate Bookstore to buy my friends book The Isthmus about the Oaxacan Zone that was hit by the Earthquake.  The bookstore sold out of the books. I returned home.

Dominoes today!!!
I lost.  Richard and I stopped to have a drink and bite to eat but Tapas y Vino couldn’t make him a Margarita so we tried a place he recommended at the San Paulo Cultural Center.  The emphasis was on Middle Eastern food so we had Tablu with Empanadas and Chicken Shawarma.  The drinks were overpriced for what they served as was the food.  Very unspecial so we stopped at the Zocalo for a glass of wine and returned home.

Saturday I had to wait for the Organic Market to come to me.  They were early 10:30 and I bought some fresh “Spring Onion” Avocados and Tomatoes. Such a wonderful service.  The quality is outstanding.  The family works together and even the son started carrying a line of candies and nuts.  He is a bit younger than Daniel, the owners son, but it is interesting to see them interact over a business purchase like Adults.

Sunday was Google Photos Day and Sunday Morning on CBS followed by 60 Minutes that evening.  That was Sunday.

Today I had breakfast and hauled all my framed photos over to the framer to reframe them right.  He put a border of paper on the Mat instead of a real black Mat that I requested and all the glue came off with the paper.  He agreed to do it for just the cost of materials and was very apologetic.  He works with his young son so that makes him honest.  Family is everything here.  I took the slow bus to the library and got my dinner and lectures paid for  and confirmed for the rest of February and March….tomorrow is one.
I went to my barber for my 6 week haircut but now it’s warmer, I get a short haircut to last 8 weeks until I get back.  He was in the bathroom so I asked his assistant  who questioned me…to say he would be back shortly but I said no that’s OK.  Sat down and just as he started in walked my barber and waved hello.  Now I felt bad but I wanted to try another and Tom recommended him.  In the first 2 minutes most of my hair was gone.  I cautioned him…not TOO short..tapered…not bald.  Well it was the shortest I’ve had since my brain anyurism.  Then he kept talking to me and I kept telling him I couldn’t hear.  My barber came out and told him I couldn’t hear!  Then he charged me 10 more Pesos.
Biznaga was beckoning when I walked out the door adjusting my hat to fit my bald head.
I had Wine and Water to start…a Souve Sopas (Chicken Soup)…then got brave and ordered broiled shrimp with Tomatillo Sauce and Rice.  I ate the over cooked shrimp and tried the sauce with some rice but not much.  So I was still hungry. I ordered a Chocolate Trufe in Strawberry Sauce with Cappuccino and Carlos I Brandy (A Spanish student of mine bought me one when he heard me order a cheap Brandy and I’ve been hooked ever since).

I took a Taxi home.  The driver had worked in Mesa and knew Joe Arpaio as does any Mexican that had been to Arizona.  He spoke good English and we had a great talk about Trump and his pardon of Joe.  Joe’s aspirations to be a Senator that replaces Jeff Flake. Made me feel good that I’m here.
Laundry Day. I dropped my laundry off at a new place that was cheaper and closer then went to try the Rye Cereal at the Bakery. It came with fruit and almond milk.  Very good.  On the way to print some photos I was going to have framed, I picked up some organic ginger turmeric and tepejilote stalks. The lady printed 14 photos while I bought some garlic from a village garlic salesman.

That evening I went to the library for a lecture on Artificial Intelligence!  It was very similar to the one on Climate Change where the lecturer pointed at the presentation screen while reading what it said verbatim.  The Climate Change lecturer power point program broke down the last 10 minutes and he couldn’t function.  Both “Lecturers” did not engage the audience or seldom even looked at us.  I couldn’t see the screen because he had his back to me while blocking my view of the presentation.  Both could have just printed out the presentation, passed it out and let us take it home to read instead of wasting our time.

Today I took the flower from the tepejilote stalks I purchased and made an
omelette with marinara sauce and avocado. 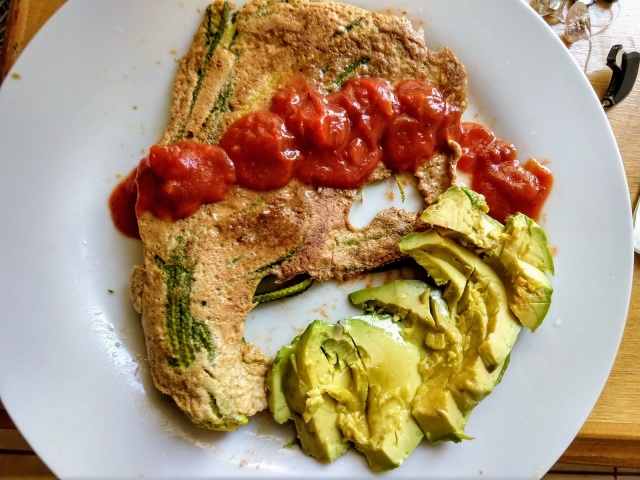 This evening I attended another lecture.  I know the lecturer this evening and he is good! Dr Louis Rey. The real deal!  It was.  I talked to him a bit about his receiving his Doctorate as the only indigenous person in the country of the Netherlands.    He told stories, sang songs, engaged the audience. His topic was Non Violence.

Tonight I met with Tom, my ex neighbor for dinner at Bistro Epicure.  We have been friends for 3 years or more now and he lives in my neighborhood but I moved away from the complex he is in.  We had a great conversation.  He just bought a house and is remodeling it with the idea that it is the last place he will live in.

Today I won my first game of Domino’s in a long time…by one point!!  Richard and I joined  a couple of the lady players for a roof top drink at sunset then Richard and I left for Biznaga and dinner.  Just after ordering a drink…an earthquake struck and the entire building emptied out into the street in 5 seconds.  After 10 minutes we returned and Orin, one of the ladies returned to join us after she went to get her credit card.  We all had a nice dinner , conversation then returned home. I was getting ready to go to bed when another earthquake struck and shook the building. I went outside but after a short time returned.  I decided a joint and bed were in order.

I took a break to get out of the house Saturday and visit the Zocalo for a cup of Hot Chocolate and a good read when Tom stopped over to the table while passing by.  We had a beer together and we both returned home.

Sunday I enjoyed watching CBS Sunday Morning then 60 Minutes later that evening.  I got caught up on my year end finances and started my free Turbo Tax Return.  Why free…because my income is less than $33,000….I live off Social Security and that is tax free since I already paid tax on my contributions to my account.
I went to bed but at 12:47 was awakened with the bed rolling from side to side….with the building.  This one was a 5.9 and took place in the state of Oaxaca.

Today I set a date with Helen to visit the Merced Market and Butcher Shop after we have brunch at Red’s Seafood Restaurant.  I was going to bring home some fish along with bacon but Red’s Fish Market doesn’t look all that appetizing.  The selection was poor too.

We had a nice lunch and after a brief stop at the market to get some chopped fresh vegetables for my soup, we crossed the street to the Butcher and I got some great bacon sliced right off the belly.  We shared a Taxi home and agreed to meet at Berlina tomorrow at 6 pm with Kurt and Lynn.  They just returned from Puerto Escondido and will be leaving for home in Humboldt County, California. 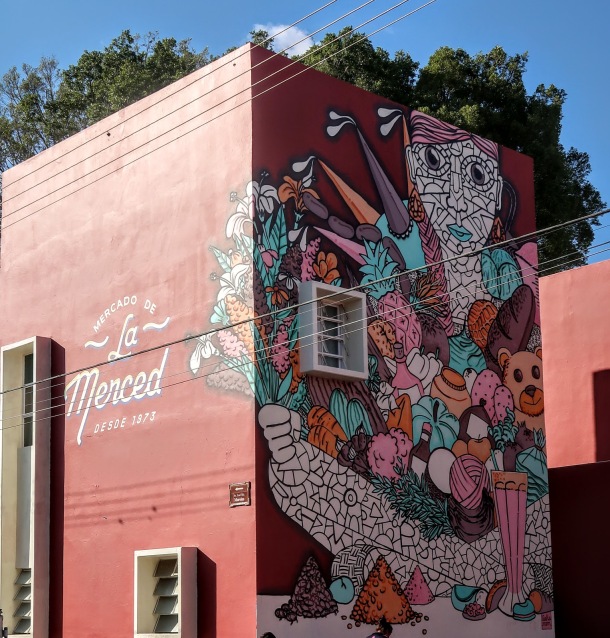 Played pool with Richard, Kurt and a new player Finn.  Finn is from Iceland but lived in Vancouver a good part of his life and is now building a home in San Felipe de Agua just North of Oaxaca City. He is a good player.  We all had a nice time. 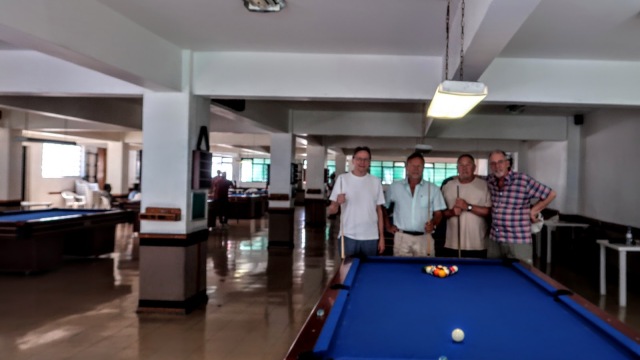 I walked over to the Zocalo and had lunch and returned home. 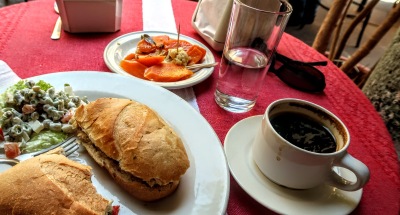 Later that evening Richard and I joined Helen, Ginny, Lynn and Kurt for dinner at Berlina then an after dinner
Don Julio Tequila at Importador. 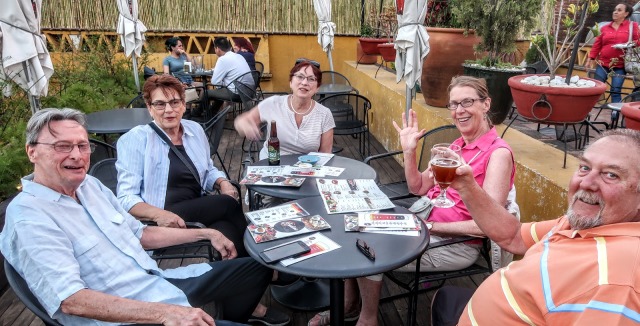 Ginny, Helen and I took a taxi home.  I had him drop me off on the corner then stopped at the local pub for a Mescal poured from an Absolute Vodka bottle.  Absolute Mescal!  I tipped the bartender a bouquet of mini roses I bought to give to Adelina but I noticed they were a little brown around the edges.  Good Night.