CLICK HERE:  15 MILLION PEOPLE DIE IN THE AMERICAS IN 5 YEARS

Be bold with an news to get attention and win hundreds of “likes”  Yes it is true story but sad.   Who was left did propagate and produce a new generation, and then another, another
….and the clan, tribe, family, lives on right here everyday as an integral part of this whole culture called MEXICO.  A real and amazing lesson in life that surrounds me on the bus, sidewalk, city center, everywhere a reminder of people that existed 500 years ago but those that existed 1500 years ago and before.  It was said that all the indigenous people of the Americas are descendants of Central Asia.  Everyone tested had the DNA that come from there.

Couldn’t resist this one either:   LARGEST UNDERWATER CAVE AN ARCHAEOLOGICAL FIND

A new day in Oaxaca starts again with a chill.  Helen arrived with Ginny.  She had a touch of the flu bad so Dr Z gave her antibiotics and scheduled her to return.   Helen was back from 2nd visit to Doctor and feeling better so it didn’t develop into pneumonia.  She brought me some Trader Joe nuts I requested so I paid her a visit and we caught up on since last year. Returned with my nuts and played dominoes at the library.

Saturday I packed some nuts and a box of wine to chip in at a home concert up the street.  Mary Rankin, a musician songwriter and singer from Eastern Canada gave a great performance at an outside venue with over 35 people in attendance.  Ginny and Helen showed up and after we went for dinner at the “Jaguar”…an Italian joint near where they live.

There were DACA protests in Phoenix at the State Capital Building.

This morning I attended Mass at the Cathedral with Helen and Ginny so we could hear the Pipe Organ brought over around 1750 or thereabouts.  The high Mass was impressive and packed.  I took a few photos but will return again for more. 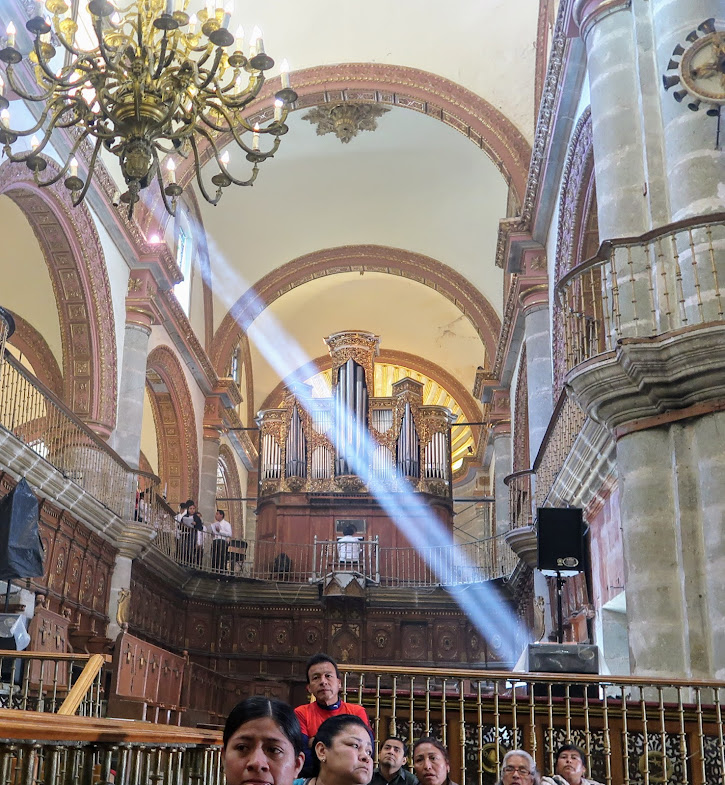 They joined me to meet Lynn and her husband Kurt for the Mid Afternoon meal at TerraNova.  Kurt had the buffet and we all had a meal that entitled us to a Half Bottle of Wine each while Kurt stuck with his beer.  We had a nice meal then left to return home when a huge group of Bikers stormed in and started circling the Zocalo.  It was the “Wild Bunch” with Marlon Brando and Lee Marvin…or so it seemed.  They were all peaceful and after doing about three round around the square all parked and proceeded to patronize the local
establishments.  We all went home.

Tomorrow I have to go to the library to meet Richard and pick up my suitcase he borrowed and collect a Trader Joe’s one pound 70% Cacoa Chocolate bar he is offering as
payment for the Oaxaca Hat I sold him a year ago.  I don’t know why I am going there to pick up MY suitcase and what he owes ME instead of him coming to my house and returning it???  Oh well.  Lesson learned I hope.
Gadi arrived for my second week of one on one Spanish lessons. It went well then she left to give Lynn her one on one lessons while I went to shop a bit where I met Kurt.  They were meeting for lunch and Gadi was with her.  We all went to lunch at Mesquite then home.

Today I met Richard and Kurt at the pool hall after Gadi left for my last lesson of this week.   Won 3 games lost 2…not bad.  Richard and I went to Terranova for lunch when we
ran into Gadi, Helen, Halina and Barb.  First time I’ve seen Halina and Barb this year.  We all had a great lunch and returned home.

Comida with Annalisa was very nice.  Same Chef at Hotel Los Pilares as the owner of Art Comibe…which I really enjoyed.  She leaves for the US and will return in 2 weeks…dog and all. I ran into my old neighbor at Los Nogales, Tom.  We walked together then decided to have a drink together.  It was great to see him and we may have dinner next week.

Opera was simulcast from the MET in NYC.  TOSCA by Puccini.  I was falling asleep so left at the end of the first act and encountered a wedding on my way to have a Great Breakfast at Berlina.

I took the bus to the Pachote Market this morning then on to Walmart and taxi back home.
Mission accomplished.  Tomorrow I get fresh eggs delivered along with organic spinach,
tomatoes and the best Avocados.  A husband, wife and the child come to my front door and I
pick out what I want from what they offer that week.  Great service!

Well, I went to a lecture (poorly done) about Climate Change, then stopped for a glass of wine and was going to take the bus home but there was a demonstration with about 250 people marching down my bus route.  I managed to get by them and make it to the Zocalo where I ordered dinner and wine but they couldn’t accept my payment because the “system” was down due to the strikers.  Communication Workers.

So now we still have teachers tents, doctors and medical workers, and now Telmex or ATT on strike?  I just paid in cash and heading home. Supposed to warm up today. It did! Met Zoe today at Biznaga for dinner.     Then we went to a concert…Szkajani Charlatans.    I met Eric , a Blues guitarist from Lafayette Louisiana.   He played at the Blue Moon Cafe there.  I loved that place and love Lafayette.  He plays tomorrow at Luna y Sol so will check it out. Both groups are staying at Zoe’s. Charlatans were here a couple of years ago and just arrived from Chiapas and leave Friday night for Tijuana.

So David played Dominos at the library with our growing Mexican Dominos fans.
One of the best games we have had. Richard and I had made plans for wine and pizza at Belanc.  We left at around 5:30 so stopped at Imporandor in the Zocalo for one then two glasses of wine.

Oh I forgot we stopped at Biznaga’s for one Margarita….then he came over to my condo for…1/16 of a waffle.
Then we took a taxi to Sol y Luna to hear Eric Louis from  Lafayette, Louisiana and a mix of Blues.  A lady looked in so I encouraged her to join us.  Mary from Portland Oregon did.   Her and Richard chatted a lot while I moved over to the bar to be close to the music.  The crowd conversation interrupted my ability to hear….as did the Mescal I ordered at the bar for a table of Oaxacans as well as the singer Eric.

When I rejoined my table, I noticed the owner was outside smoking a cigarette
with some young friends.  I went out and lectured all of them about the addiction of nicotine…then someone passed me a joint and I had a couple of hits then returned to the music when one of the men at the table, handed me his loaded pipe and a lighter.  I stepped back outside alone …took two hits…and said GOODBYE…got a taxi…exchanged business cards with the driver.  He spoke perfect english and lived years in the Southwest USA including Phoenix for years.
I made it up the stairs…reminded me of benders past. It had been a long time for me and felt great.  We will see how it feels in the morning…now 1:12 AM.
Two days later I recuperated and headed for a  Mexican bar then a gringo bar to watch the  superbowl.  I will sign out now…until the next blog post…Amigo David