Global Entry Pass got me right through customs and immigration.  Took the shuttle bus to Alamo’s Car Rental. Went right to pick-up area and choose my car
…hopped in and gave the lady my Special Alamo’s pass and was on the Mass Turnpike by 9 pm

I was in bed at 1 am….7am  Amsterdam time.
I had been up for 22 hours with one nap on the plane to Iceland.  Terrible sleep but a great bed!  Maybe it was the hemorrhoids.

Sad news was my Aunt Charlotte, Helen and Barbara’s mother, my father’s sister, died at 96 and 10 months of a stroke.  Her wish was to be laid out in a casket.  They said she looked so good!  She liked looking good…always dressed nice.
She was cremated after the funeral.  The family  are returning to my home town of Attica on the 15th of October to put her ashes with our “clan”.

Wednesday the 8th
My cousins Helen and Barbara and I all went to a nice restaurant along the Hudson River with David , Helen’s husband driving and picking up the bill. I had Lobster Roll of course and fresh Peach cobbler.
Just after walking in the house, David, who has a combo pacemaker/defibrillator, got zapped by the defibrillator for the first time.  He was a little pale but OK.  We called the monitoring station and they said he is to come in immediately if it does that again and in the morning go right to the hospital for a check up with the cardiologist. 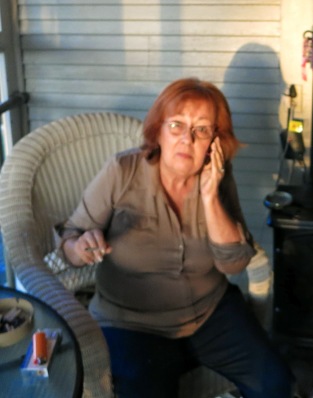 Meanwhile Helen’s daughter, who has an on going problem with the drink disappeared then called her ex husband in Houston to inform him she was swimming in the ocean.  Found her today passed out on her lawn.  Problem is she has two daughters.  One had been staying with Helen and is on her own but returned to live at home and the other is still in school.  Her sister, Helen’s other daughter took care of the younger daughter…I guess?

Thursday the 9th
Helen and David left for the hospital to be checked this morning. I took pictures of the surrounding fall foliage.

I’m treating them all to dinner tonight if David isn’t admitted to the hospital.
He wasn’t and only lost a day of work instead of his life.

I have been following up an enquiry about our relatives in Ancestry.com.  A man named Howard John Taylor in San Anglos Texas claimed to be our blood Grandfather’s son.  That made him my Aunt Charlotte and my Dad’s half brother. Both of them knew that but last saw him in 1950 at their father’s funeral.  He was 7 years old then and I was 5 and they were in their 30’s.
Any contact with him ceased and he disappeared.  It was never discussed by the family.  There was the death of my Aunt Helen (Charlotte and Dad’s younger sister) in a drowning, a divorce, remarriage, my Dad quitting school at 15 and leaving Attica never to return for 13 years, and just a lot of mystery that wasn’t discussed.
My cousins and myself were trying to trace our Grandfather’s ancestry and so was Howard when he saw our notices on Ancestry and emailed an enquiry to me.   I followed it up before leaving to Europe but hadn’t heard back.  Barbara decided we should call him at the only contact I had…his place of employment…the San Anglos Museum of Art in Texas, which won some award presented by Laura Bush to the Museum for being one of the top 9 in the US.  Howard is the Director and has been involved in the Maritime Museum, another museum in Buffalo, something or other and has had a stellar career Managing Museums.
She called and asked that he call her back.  When the secretary asked what this was in relation to, Barb replied it’s personal. He returned the call that afternoon and both Helen and Barb talked to him for almost a half hour.
He was our half Uncle and 71 years old, the same as Helen and only two years older than me. So many questions were answered that afternoon and so many more to be answered. Howard only knew his father until he died when Howard was 7,  then later, his mother remarried.  He had a half brother and half sister from her as well as from his father’s first marriage to our grandmother Julia.  He was basically an only child like me.  He had been to Attica and remembers meeting me and my friends he played with while his father talked to my Dad.  We all agreed to keep in touch and resolve all these questions.  There were many that a movie could be made from the story. His father, our Grandfather being the black sheep of what became a very well off family, etc. 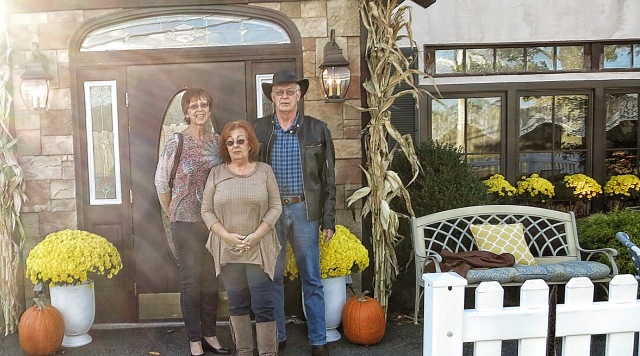 We left for Max’s restaurant after our conversation with Howard,  for our 5 pm Reservations.  President Clinton likes Max’s and so did we.  A great restaurant that is beautiful, has great background music, pleasant well trained wait staff and an excellent menu and wine list.

All accompanied by a nice California Pinot Noir which I finished at home while we sat up watching Blue Bloods.