When I awoke, I thought it was late afternoon but with only 5 hours sleep it was 9 am and a dreary grey SUNDAY MORNING.  I didn’t hear or see Sam, my landlord, so took a shower and decided to go out for coffee.

The streets were empty but started to fill with tourists like myself.  Japanese with their cameras clicking away.  Backpackers with their hiking boots and potato jackets.  I was wishing for one myself. It was cold and threatening rain.  I ended up in the center before I saw anything that was open.  Icelanders sleep in on Sunday!  The homes are interesting in that most are covered in corrugated metal sheets or plastic.  It is done so well you think its wood. The whole house including the roof and all the sides are sheets of corrugated something.  I also think I should have packed a wool hat, umbrella, windbreaker, binoculars, scarf, and bathing suit for the hot springs…though I’m sure some   don’t require them.

The Coffee House Bakery was just that.  No Ham and Eggs or anything hot except coffee.  Lots of pastries.  I had a juice , a long john, and coffee.  Looking for more I ventured out into the tourist area and an information office. 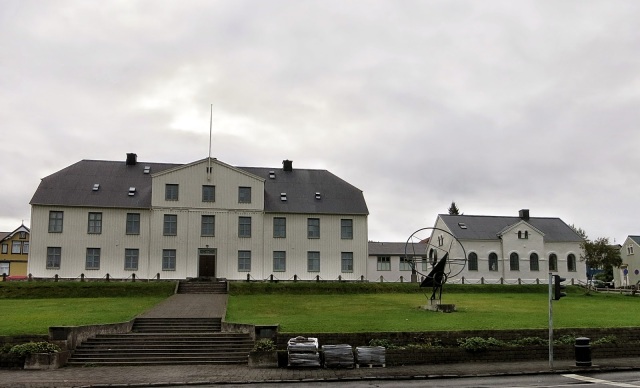 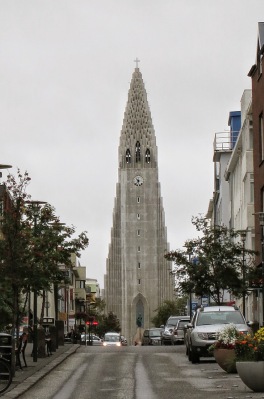 A free map and some brochures and I headed for the main church to catch the view from the top.

An elevator took me to the top when just as I was taking a picture of the view the church bells started ringing just above us.

The noise was deafening…well I’m already deaf but like the eye opening view, the bells were ear openers.
I checked the map and found my room was just down the hill.  It started to rain and I started home.  Just then I noticed the Sculpture Garden I read about and saw the open gate. 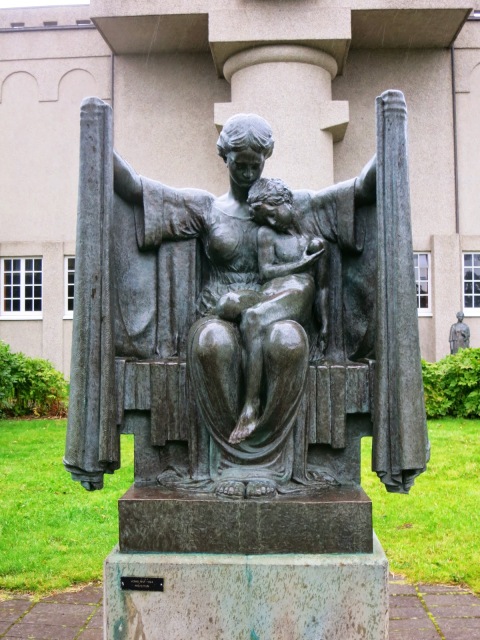 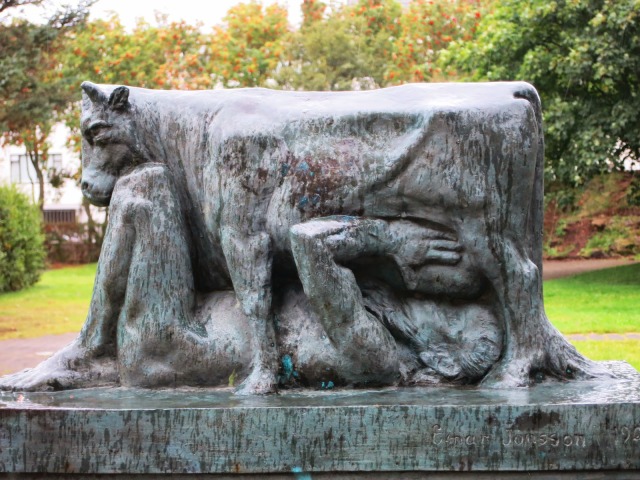 I quickly ran around in the rain and took as many pictures as I could before starting to feel my coat soak through.  There was no 7/11 or Circle K around to pick up a snack, bottled water or something to put in the refrigerator for myself so I returned empty handed to and empty house.  It is now around 2 pm and I’ve recharged my camera and am ready to venture out into the rain again for an Icelandic lunch.
I choose Loki because they serve Icelandic food and it was the closest.  My lunch was a Meat Soup with Icelandic Brown bread and butter with Smoked Lamb on the side.  Loki Tea was made with Artic Thyme, Sea Moss, and Viking balls or something.  I was good though.  I finished with Skyr (skeer) Cake (Yogurt) with Rubard sauce and Whipped Cream.  The whole meal was excellent but I’m still hungry.

Before returning, I picked up some bottled water, OJ , lunch in a cup and some Skyr (skeer).  That should keep me at home for a while.  I need to get rest so I can enjoy a full days sightseeing tomorrow.  Plenty of Museums, galleries, restaurants and shops to keep me busy for the next four days.
Sam came home. He left at 7:30 this morning for wilderness emergency rescue training.  Repelling off Mountains and such things.  Very buff ,healthy individual…and smart to boot. He recommended the restaurant next door as one of the best Seafood places in the city and said I should call in a reservation as they  are usually packed on the weekend.
He left and I went over and told the Hostess that I was a quick eater and if she suggested something quick I would be out of their before her party of 40 showed up in 40 minutes.  She suggested Whale and I feasted on a Minke…two 8 oz slices that looked like sirloin or calves liver.  It tasted good but had sinew throughout and was tough to cut through the sinew. 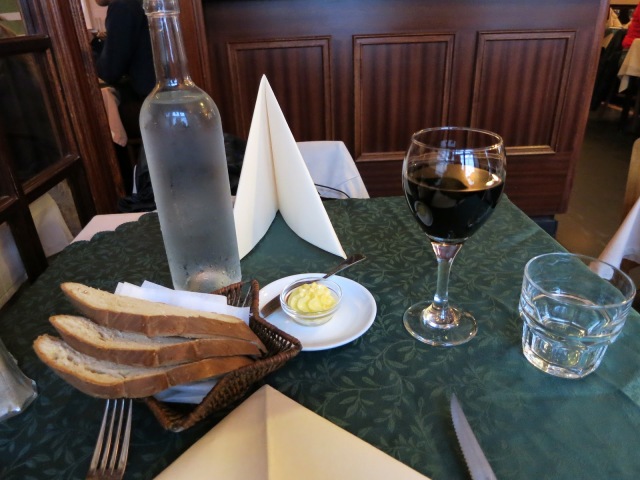 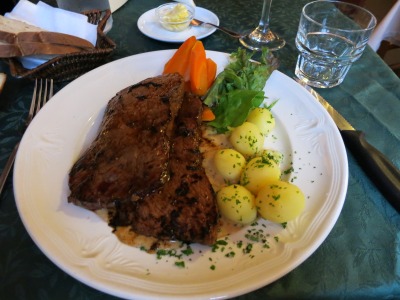 It was cooked RARE and looked like raw meat when you cut into it.  The order came with boiled potatoes and carrots, both fresh.  There was a rich cream and herb sauce with the Whale and nice fresh Rye bread.  I washed it down with the house Red Wine.  The bill was approximatly $54.  I left full, happy , and on time!  The party of 40 were waiting out in the rain.  I just had to cross the street!  Sam and I both agreed the cut of whale came from the tail.  When I came to the tail of any large ocean fish in my restaurant, we removed it, carefully separated the meat from the sinew and put in in the chowder…never serving it to the customer for an entree…but I forgot…the name of the restaurant in English is the Three Frenchman!  Most French have a tendency to go for the money.