Skip to content
It is less then a week before my long awaited Labor day visit with my daughter and her beautiful family in California. I treated myself by attending a dinner party with my 50 plus Meet up group at Christos.
The lady to my right and I were talking about our travels when I mentioned my return to Oaxaca, Mexico. She had lived there after a trip years ago . She stayed there with a travel friends while they explored Central and Southern Mexico and when the long journey was coming to an end, she could not leave! She left her friends at the airport , canceled her flight, and anxiously returned to Oaxaca. Eventually, after two years, she returned to her home in the States but still longs to return and thinks of Oaxaca all the time.
A story I have heard many times and can vouch for personally having cancelled my month’s vacation touring the Yucatan to remain in Oaxaca and to return for the summer….and the following winter. It’s a magical spell Oaxaca has that affects those that it snares.
Bob was waiting outside of Christo’s as I was leaving with my leftover food for lunch the next day. He did a mimed eating gester with his hand to mouth but no food while his eyes gazed at me longingly….sure Bob..share my meal. I drove off watching him devouring my stuffed chicken and gnocchi with his hands to mouth…no mime this time. No shoes, tattered clothes, hungry, and no home…but a full stomach.
I leave for Iceland after I return from a Labor Day weekend visit to my daughter’s new home in Lake Elsinore California. It will be wonderful to see the grandchildren Ellie and Chas again. My Son in Law, Brian , has generously treated my daughter and I to a wine tour at one of the Temecula country wineries on Sunday afternoon to imbibe in the nectar of the Gods.

Iceland is now reporting a volcanic eruption after several minor earthquakes. Now, it is a baby…but a few years back Iceland had a Volcano that disrupted air traffic for months and sent ash spewing all over Europe and Asia. I have never seen a Volcano up close? Thinking about the $265 Helicopter flight around the Island as a way to accomplish that.
My trip to Lake Elsinore to visit my daughter and the grandchildren went really well. We went to a Baseball game the first night then watched fireworks. 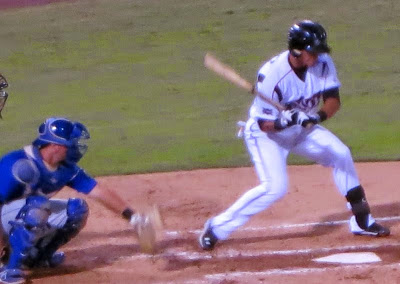 I took Chase out for breakfast in the morning when Brian, my son in law stopped by. I visited his home on the Lake then we all returned back to Heather’s apartment where Brian later cooked us some great Mahi Mahi fish tacos!
The next morning I took Ellie out for breakfast then Brian dropped the children off at the In Laws while Heather and I did our wine tour.

Brian showed up just as the tour ended and the 3 of us had a great dinner at a local favorite in Temecula. That evening I visited the next door casino before retiring and won $500 at Texas Hold em and still managed to get to bed early for the trip home.
I stopped over to the apartment on the way out of town to share my winnings with the family before driving home in record time.
Three days later after packing, getting a haircut, flu shot, running last minute errands I was ready for Iceland and a new adventure.
Jeannie, my neighbor , was nice enough to forgo a couple hours of sleep and cart me down to catch my 7 am SW Air flight to Boston via Chicago. I was there for boarding at 6:30 am with baggage checked and eager to fall back asleep when SW announced the plane was broke by a passenger the day before and the exit door needed to be repaired before leaving …which turned out to be just late enough that I missed the Boston connection in Chicago by 5 minutes and so two hours later caught another.

I felt good arriving at Logan before sundown, smelling the ocean air, listening to the Boston accents, and checking in at the Winthrop Arms in Winthrop village. Winthrop was named after the first Governor of Massachusetts and it a charming New England working class town. The Hotel was bought a few years back by David Goll, a retired hockey player from England. The deal was done with a handshake. It is a three story mammoth mansion in the English style of dark wood, marble floors, stain glass, heavy furnishings, etc. A nice dining room welcomed me on a busy Friday night.

The food was reputed to be excellent and my first choice was Baked Stuffed Lobster but the Fresh Swordfish Steak at 14 ozs won out. I ordered a Rum Runner for starters then a bottle of wine. The wine ended up in my suitcase, (thanks to screw tops) and a Brazilian De-Cafe Coffee was my dessert.

The owner , along with two waiters and myself spent quite a bit of time so I could finally get on the Internet. Then I returned to the room and ended up falling asleep. This morning I had to return downstairs to get back on the computer. I’m sitting in the lobby looking out at the Atlantic Ocean having my coffee and checking my email. The small boats sailing by and the walkers doing their morning exercise ….I will sign out and go with them. 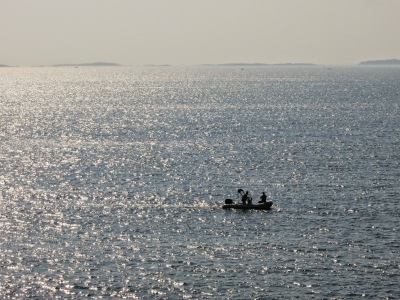 It is hot and muggy at 9 am so my walk is short. There are no businesses close by to get breakfast so I return, call a taxi and end up at terminal E at Logan around 11 pm. Too early to check in for my 2:30 flight. No one is at the Icelandic desk and the food court is beyond security. You can’t get through without a boarding pass so ended up forced to get sustenance at the only available Boston Coffee. A Ham and Cheese sandwich and a Latte is the closest I get to Breakfast and only $13.00. 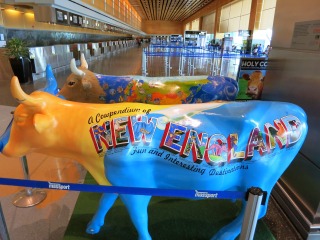 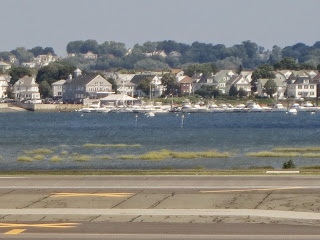 The taxi driver informed me that when Iceland went bankrupt, the European banks wanted their due in CASH but Iceland doesn’t have C in it’s alphabet…so they gave them ASH.
Well the 7000 mile , 13 hour flight to Tokyo just left and I’m next. A quick Tuna Melt to carry me through and I’m off to board.
I sat with two lady travelers. They were with a third but she got a different seat assignment. They had planned to rent a car and do the Ring around the country, hiking, hot springs…a nice plan. I watched Of Horses and Men, a movie filmed in Iceland and acted by Icelanders. It was a great film. They were sleeping and went the film ended I tried to do the same but there other travel friend stood over me in the aisle while chatting the two wide awake fellow travelers. Finally we all got up to go the bathroom and when I returned they explained there friend had empty seats so they were moving. I tried and got a short nap before the 5 hour flight ended and we arrived at the Iceland airport at 11 pm. 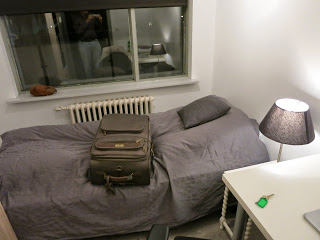 I went through customs then picked up my bus pass and some kronas for spending money, hopped the bus and was off to the capital. The bus arrived at the station in Reykjavik and I got a taxi for the 10 minute ride to air b and b room. It was 1500 Iceland krona or $13. Not to bad. My room was 3 flights up and I was huffing and puffing when Sam greeted me at the door of his apartment. My room did NOT have a private bath but a shared one down the hall and was more like a closet. It was too late to complain and was not the first time I have been lied to or misrepresented and over charged by Air B N B. I don’t like paying over $400 for 5 nights…if you can call checking in at almost 1 am, a night. Sam had no suggestions on where to go to get some food except a 5 minute walk. I spent an hour unpacking and getting settled in my postage stamp room and then headed out on Saturday night. The town was crowded with drunks. Shouting, falling down, arguing, plastered drunks. They were lines out of every night club or disco joint in the downtown. Empty wine and beer bottles around the sidewalks BUT everyone was stylishly dressed for the night out. Friday and Saturday are the two nights every young blooded Icelander is out to party. They all work during the week so this is it for them. People were polite or just didn’t see me. I finally found a line at a hole in the wall window to order and pick up…hot dogs. I jumped in line and got a dog (Iceland uses lamb, beef and pork) with the works and chips to go. 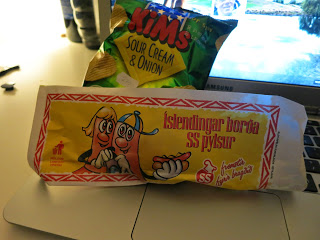 No sandwiches or any other food available to speak of and I had walked quite a way to get there. I returned with a bag of chips…the dog was eaten in five minutes. Very good!  It is now four am and I’m tired. Good night!