I stayed in today though the change in weather cooled Oaxaca down beautifully.  I did take the bus to meet Halina and Kay for dinner.

We ended up at la Quince Letres.  It was nice but nothing special. 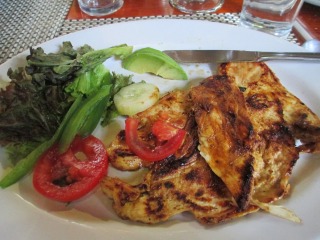 We decided to try the Happy Hour at Hotel Azul rooftop where they gave us complimentary Mescalini’s. 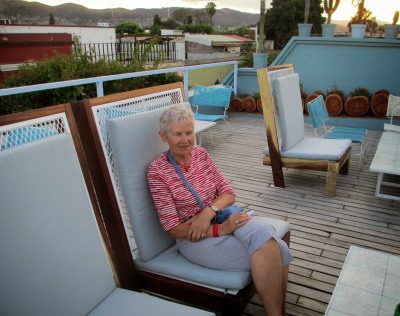 They didn’t seem to have any Mescal in them.  We decided to go down the street to Casa Oaxaca that is famous for their Mescalini’s and rightfully so. They shook and poured them at the table. They were good so we decided to meet their again tomorrow for more. 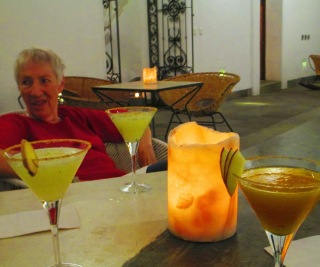 Leaving this morning I noticed everyone running around the corner and no one at the bus stop?  Looking down the street I saw a bus but it was parked in the middle of the street horizontal blocking the road.  You guessed it…another teacher’s protest preventing all those that want to work from getting there or arriving late.  I had to walk fast to make my meeting with Zoey…legs cramped up in such pain.   I met Zoey, a traveler and CouchSurfer, at the Library this morning for coffee.  We went to a Cafe on Los Libras nearby.  She and I had a nice conversation over Breakfast and walked back to Llano Park where I caught a bus home.
I visited Mag and brought him some Feta cheese I hadn’t opened and probably wouldn’t. We talked a bit and I mentioned the Night of the Witches that I was to visit on Tuesday, tomorrow.  They were going so he invited me to meet them at 7pm at the restaurant and spend the evening with them.

Perfect…now I had to meet Halina and Kay. It was Halina’s last night so I treated them to Mescalini’s and I had a fantastic Chili Stuffed with Scviche! So good.
We then headed for La Olla and Bill Pumphrey’s Birthday celebration on the rooftop terrace.  About 20 people showed up and we had a really nice time. Bill treated us with his Social Security…said he  couldn’t spend it all in Mexico so wanted to treat everyone.  We left after about 2 hours of fun, jokes , and conversation…oh yeah…drinks and munchies. 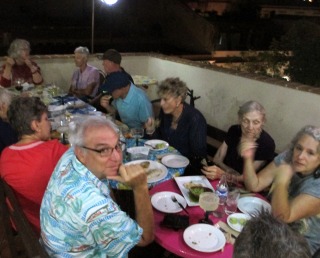 Kay and I bid Halina a safe trip home .  Another great night.