It was another sleepless night with weird dreams, sweats, chills,etc.  I woke at 7 a.m. with the realization I had altitude sickness.    Fatigue, shortness of breath, hyperventilating  confusion, on and on.  I had read older people in Mexico City have a problem with this, especially if they have a respiratory problem to begin with.  I couldn’t find a pollution report on the Weather Channel or anywhere.  I did find out that Mexico City used to have the worst pollution but in the last two years it has improved to be on par with L.A.  I guess that is an improvement.   My diarrhea increased in frequency so I did the best to prepare for the long trip in the mini van. I took my lomitil (for diarrhea) and stocked a bunch to take with me.The diarrhea frequency has increased .   I had a bowl of cereal but no coffee.  It was to be the last food I ate except for a Flan later that afternoon. 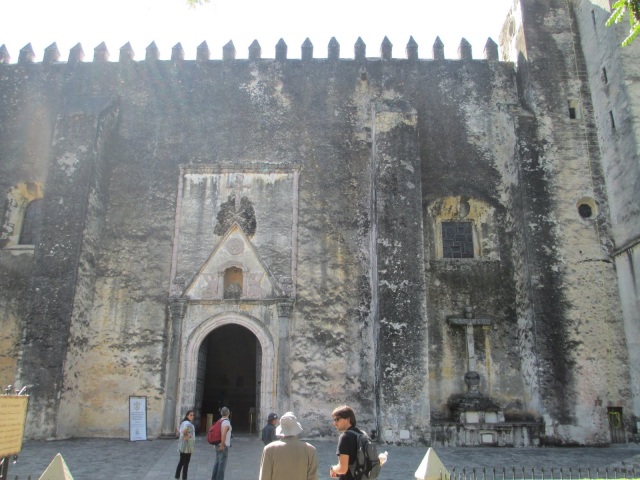 I had to find a bathroom at every stop and sometime go back twice in ten minutes.  I can’t tell you how many times that was today but my bottom is sore.           When we got to Taxco, a mountain silver mining village, I was having a hard time keeping up with my small group consisting of our 75 year old guide, Carlo from Santiago, Chile and a newly married couple from Buenos Aires.  The wife was pregnant. I sat on the sidelines most of the day.
It wasn’t the altitude , which was less than Mexico city but climbing steep stairs and inclines.  The weather was perfect and the air was clean and fresh.  We did a tour that included another Cathedral built by a rich Mexican who had discovered the Mother Lode when it came to silver veins.  We broke for lunch . 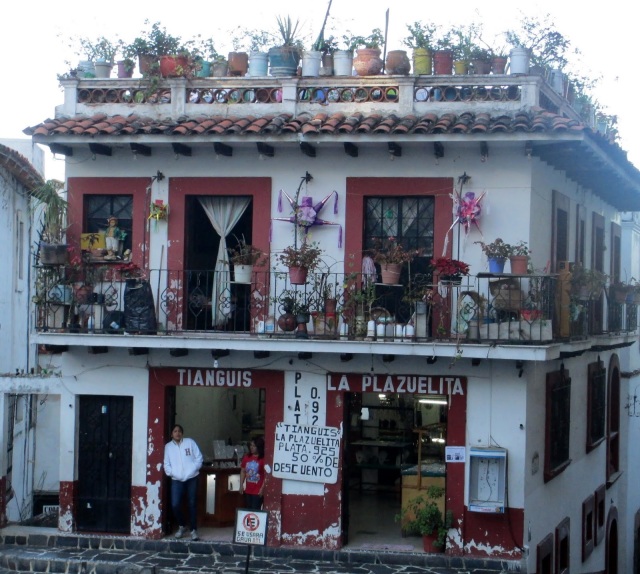 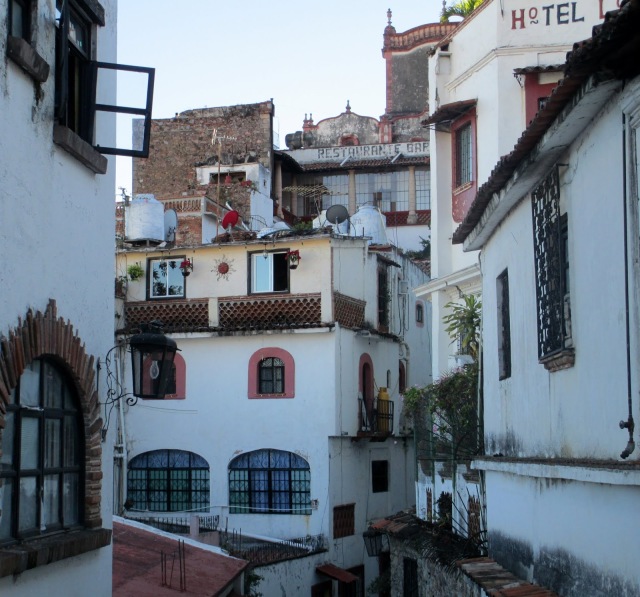 Carlo, the other couple and I while Hector was off visiting his friends.  I was in the toilet when the waiter came for the drink order. I returned just as the waiter was bringing the drinks and taking food orders.  He seemed put out when the gringo ordered water and a Flan.  The South Americans were conversing in Spanish.  I was wondering if I could have my water but our waiter was over chatting it up with the other waiters .  We were four of eight customers in the restaurant.  When I couldn’t get anyone’s attention, I went to the bar and ordered my water then returned.  I asked the lady if she had visited the United States yet.  She promptly replied she didn’t speak English or understood what I was saying.  PMS. Carlo learned to ski in Bellingham Washington while he attended college there on an exchange program and had been to Phoenix while visiting the Grand Canyon.  The lunch came and we exchanged travel experiences and enjoyed each others company.  She had a bad headache but now seemed friendly and cordial.  The bill came and everyone started counting Pesos.  USA is one of the few places where a tip is expected and a large part of the servers income.  I do believe we get better service as a result and the restaurateur can afford to staff te dining room properly.  I owed 61 pesos and just gave him 100 to keep while others were still counting out their Pesos.  I was waiting for the waiter to return with change for another 100 so I would be able to tip our guide when the time came.  Everyone was waiting outside when the waiter returned with my money and then put BOTH arms around me and hugged and thanked me.  Well appreciated 30% tip instead of 10%.  I think Raul will be my friend for life.
When everyone was on free time, I sat in the plaza taking in the sights while talking to Hector our guide. He had been a guide for 50 years.  He impressed you as an educated college lecturer.  He had been shopping an bought a small hand drill like I used to have as a child, which was the last time I saw one like that.  He explained that when he has time off he enjoys a quiet life when at home.  His hobby is woodworking.  He asked what I do with my time in retirement.  I replied that when I’m not traveling, I enjoy golf and poker.  He asked if I was professional.  I explained both were only hobbies.  I have a story for you , he said.  One day , when I was a boy of 14, my father asked me to take the bus to Durango for an important errand.  I was to meet my Uncle at the main hotel in town.  There he would give me a package of money, lots of money, to return to my father soon.   I did as I was told but as I was leaving , there was a man in the lobby with some cards and he asked if I wish to take a game of chance with him.  I was young and naive so agreed to try one chance.  I used a little of my money and won some so when he thought I could win more.  I lost my money and all of my father’s.  The man gave me 150 pesos so I could return home.  When I arrived my father was so saddened.  The money he borrowed from his brother to pay off a loan he had taken for our home.  He was behind and in financial difficulty.  The police came and took him to prison when he couldn’t pay the loan and he lost our house too.   I have never held a card in my hand since then.
When the day was over, I wasn’t sure I was going to make it to my bathroom even though we stopped once on the return trip. I did and then knew I needed some food.  I went to the 7 Eleven and stocked up on Activa.  Then stopped at the coffee shop to buy another solid yogurt and a muffin.  The Yogurt turned out to be whipped cream with jam on the bottom.  I drank a quart of Activa, took lomitil and NyQuil and am about ready to drop over.  The cramps and the stomach pain subsided but I can’t keep awake.