I went to bed early to heal my body and rise early for my long day of travel to Taxco and Cuernavaca.  I hardly slept at all on my “pool table bed” and awoke with a rush to the toilet.  Not a good start.  I woke late and was to be picked up in 45 minutes.  I rushed to be ready.  The last tour, they arrived early.  It was 15 minutes after the appointed time when I asked the front desk to call them.  Dario returned with a message they would be there within 15 minutes.  Fifteen minutes later and I returned to find out there weren’t enough people for the trip and it was cancelled.  Welcome to Mexico.  This is not a problem nor is it unusual while traveling.
Monday in Mexico City, most attractions are closed.  I remembered the Temple Major and the Monster / Egyptian exhibit so decided to have a nice real breakfast at Sanborn’s after catching up on my blog then head down there for the afternoon…after taking my anti-diarrhea pills. Never travel without them.
Four gorgeous REAL blondes from Denmark or Sweden greeted me in the hall wearing their underwear.  I wasn’t ready for that small pleasure but it made up for the cancelled trip. My plans and I was not happy.  Not because they changed but because the tour company said they were running late and would be there in 10-15 minutes.  My guess is they wrote me off when they realized they hadn’t picked me up first and taken me to their station to pay before leaving.  They had left the tour company and were on their way out of town when they got the message to pick me up. Either way, it was inefficient and I was put out considerably. 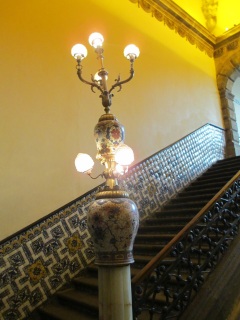 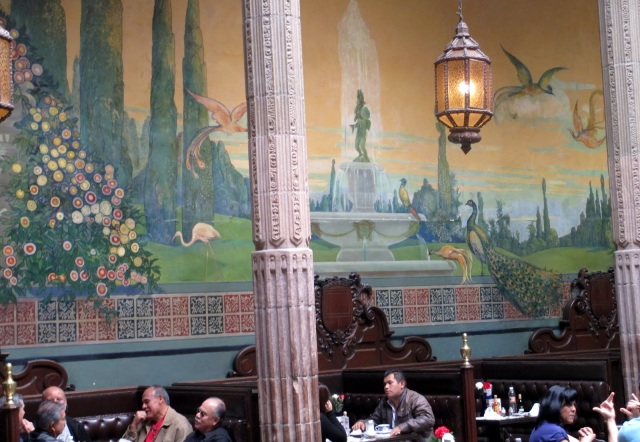 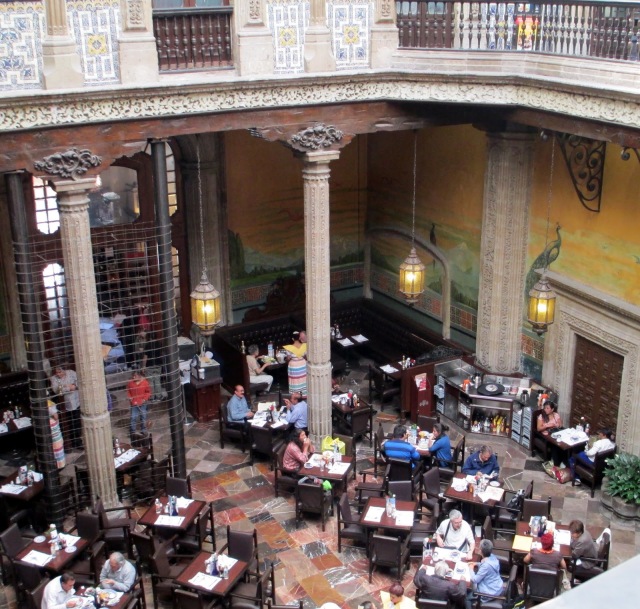 Sanborn’s was still serving breakfast when I arrived.  I ordered  scrambled eggs with chopped ham, a fresh juice, and a small roll greased down and toasted on a dirty grill.  The same one they scrambled my eggs on.  All this came with one of those frozen potato patty also fried on the dirty grill.  The juice was great and so was the toilet…thank God.  I took some photos of the building and walked around a bit after paying $14.  It was worth it to see the building.  I noticed the Mexican’s order coffee and a pastry and sit for an hour while reading a book or catching up with a friend.  I will return and sit at the lunch counter for coffee and a pastry. That is in a separate area and equally as beautiful.
There was still some big event going on at the Zocalo as I passed by to the Tempo Major.  This is where they discovered the huge Aztec Calender Stone “Wheel” while doing a construction project near by in 1979.   It is now a protected archaeological site.  A Monster exhibit and one about Tutankhamen were being presented at the Colonial building next door.  I visited the Egyptian one but it was only replicas of the boy King , his mummy, and related items…they also had a nice toilet…thank God.  I met Jerry from Chicago who was skipping out on some work he was sent to Mexico City to do.  He didn’t have much time before he had to return but most all the good things were closed on Monday.  He was the only one with shorts on in the entire plaza.  Not that is wasn’t warm…but Mexican’s do not wear shorts, nor do the Spanish.  They are modest. I’m not but don’t want to be singled out as a gringo any more than necessary. 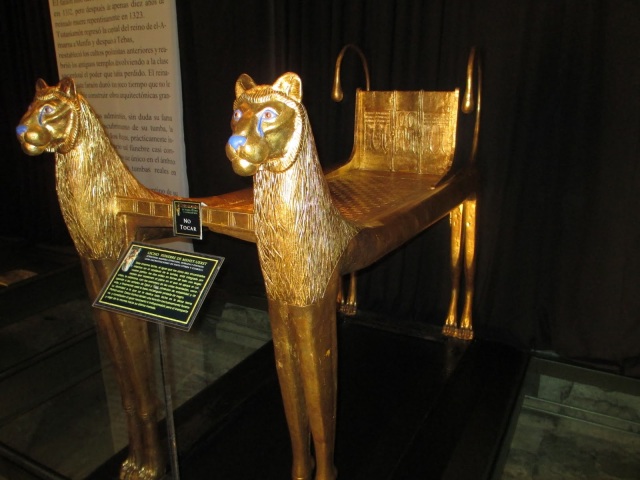 I was returning to the hotel to shed some clothes when I passed the hotel I planned on staying at a few days before I flew back to the USA.  I stopped in and booked my reservation and noticed a tour agency so inquired about taking the tour I missed.  It costs me $20 more but they said they would show up.  I leave tomorrow.
When I arrived at the Hostel, they were spray painting the bar in the Hostel open area and the fumes permeated everywhere.  I decided to run some errands and visit a recommended restaurant.  I purchased some toiletries at the Pharmacia  then half way to my goal, I realized I didn’t have my camera so decided to return Wednesday to take some pictures in the area.  The more I walked, the more pictures I wanted to take .If I was to return on Wednesday, I would have lunch at the restaurant then so stopped at McCafe to do this blog. Getting close to evening so will stop for a snack and say goodnight.