I slept fairly well .  I woke once during the night and made 4 trips to the toilet before returning to sleep.  I think the NyQuil helped…no dreams, sweats or chills.
I got directions to the nearest Doctor and decided to walk.  There was a bank on the way so I took out some more Pesos from the ATM and arrived at the Doctor’s office.  She saw me after a brief wait but didn’t speak any English so there was this very comical body language going on between us.  Especially when she wanted to give me an injection.  I dropped and bent over but she wanted me laying on the table not bent over…I moved around the table and bent over and she started laughing.  We both were laughing.  She charged me $9 for the injection and her consultation.  She told me to stop the lomitil and gave me three medicines with some re-hydration fluid.  I walked back a new man.  Total cost $35. 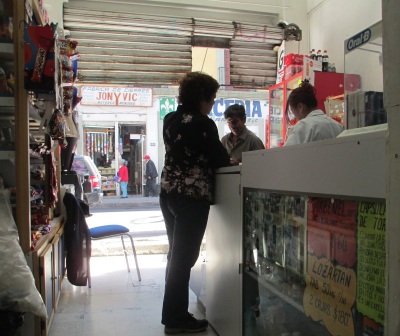 I observed my first black person since leaving the plane at the airport.  There are a lot of openly gay and lesbians in Mexico City and they have the legal right to marry. My day consisted of returning to Sanborn’s for some solid food and a walk in the park with an ice cream.  I figured I lost about 50 lbs in the last two days and could indulge.  The city was getting to me.  Constant loud noises even in the hostal.  Tours through the hostal.  Business men etc.  Quite a noted place.  Mostly for the expensive restaurant and the architecture.  I found out about it in Dwell magazine for architects and designers. I sat around the hostal and played poker on the internet, read and when to bed.