This week I had dinner with Annalisa.  We were to have Japanese food but after she arrived
she asked if I would go to Asada Vasco instead.  We were in Colonial Reforma in the North of Oaxaca so enjoyed a long walk in a different neighborhood until reaching the restaurant for one of their Lamb Specialties.  Lamb Shank off the bone with Vegetables and of course some Wine.  It was very nice. 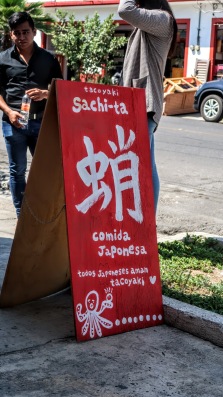 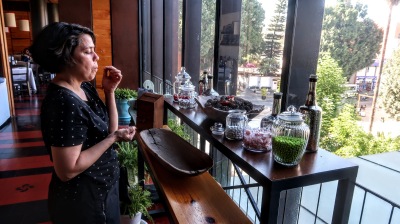 Yesterday I stopped at Belanc Bakery for an English Muffin before winning my Dominos Game at the library. While leaving the library, one of the vendors that sell custom bracelets with your name on it….showed me one that said FUCK TRUMP. Then I walked Bob, our “leader” downtown where I stopped for a Sandwich at El Jardin before returning home.  While finishing my muffin, a lady sat across from me and was eating the Rye Cereal I sometimes order.  I commented that it was one of my favorites and she remarked she has been coming to the Bakery for 5 years now every winter when she visits Oaxaca.  When I asked where she was from she said Plymouth, Mass, where I opened my first restaurant and turned out lived only a block from her home.  She returns in the summer but has since bought another house in West Palm Beach and rents that on Air B n B for the winter while she comes to Oaxaca.  Small world.

When I got home I was playing on the computer and watching a video of people from all over the world when I noticed Wernher Krutein in the credits as the Producer.  I wrote him to see if he was the son of Manfred and Eva, SERVAS friends I knew from long ago and I am sure have since passed away.  Manfred worked for the CIA on a 7 year covert operation to resurrect a Russian Nuclear submarine from 3 miles below the Pacific Ocean off the coast of Hawaii in the 70’s.  He acknowledged he was the son and sent photos of the ship with his family from back them.  I wrote him back my story of our SERVAS visits to his parents home in Irvine and their visit to me in Phoenix.  Lots of coincidences.

Today I read, play, walk, and relax. Sunday, tomorrow…is Dim Sum Dinner at a private home with 14 of us attending.  Should be interesting. I emailed Helen to see if she wanted to join me to eat but declined after we set a date for Tuesday lunch at Tres Bistro.  I took a taxi to Biznaga and had a great Kebob of Shrimp, Tuna , Salmon,Tomatoes , Mushrooms, and spring Onions served with a Sweet Potato sauce with lime and Rice.

On the way back home I looked for a vendor that sold Fuck Trump bracelets.  Instead I encountered a Great Trumpet player accompanied by a fantastic Banjo player.  I gave them all the change I had before topping off the evening with a “Carlos One” Brandy at Importando. The aftermath of another Wedding… 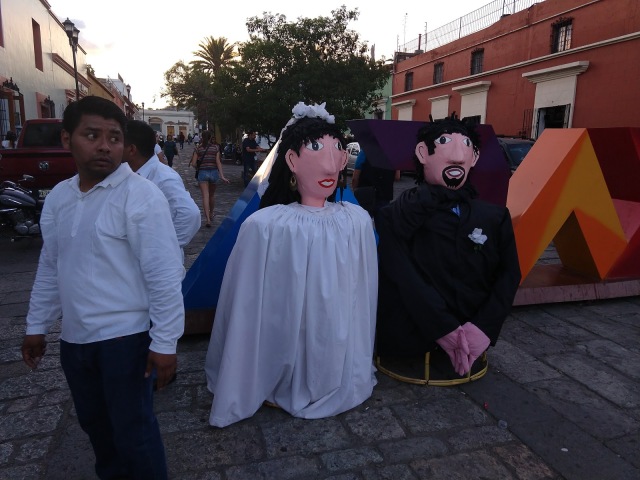 So I felt the world in my face on the way home…and I embraced it. I can’t do that in my car in Snottsdale.  When I arrived I looked for a movie on Netflix and came across the Danish Woman…10 minutes in a friend ask this famous artist couple how they met and the wife explained how they encountered each other and then she kissed him and she felt as though she was kissing herself.  I’m reading Blue Highways by William Least Heat-Moon.  Written BG  before google or computers…what a different world.  He actually quotes people that changed the world….what will Trump’s quote be…I GOT A BUTTON THAT WORKS…OR MAYBE IT’S PUTIN THAT WILL RUIN THE BEAUTY OF OUR EXISTENCE. Our memories will be our legacy…that is it.  Nothing more.

I received an invite from Laury, the Irish lady from Boston area that I met last week, to meet her boyfriend at the Bakery this morning.  They had visited my place to see the location after I sent some photos.  She is returning next year and as always looking for something more permanent to return to.  They arrived shortly after me and we ordered some coffee and breakfast.  Her boyfriend was from Naucet Beach area I believe he said.  It was his first time in Oaxaca and already was enjoying himself.  We had a nice visit then I went to play pool with the “boys” and they went to celebrate their last night in town until next year.  She had mentioned a review by Calvin Trillin about “The Land of the Seven Moles”.  I googled it for you and up came “Photos from the Land of the Seven Moles”.  This is what inspired her to come to Oaxaca….Rick Bayless , the Chef from Chicago that is on the Food Network featuring Mexican food , inspired me.

Helen and I met at Tres Bistro to try out their new Comida del dia.  Menu of the day Special…it was good but TerraNova is better.  We said our goodbyes since Joan is arriving Saturday and will spend her first 4 days with me in Mazute visiting seafood restaurants and I hope to get some sun.  I return the day Helen and Ginny depart. I’ll see Helen again in September when I return to Western New York for our reunion. That evening I encountered her and Ginny at the MOST BORING LECTURE EVER.  After we stopped at Luna y Sol restaurant where Emilio and Pauline just finished the Grand Opening last Friday of the newly remodeled 4 year old restaurant in this location. 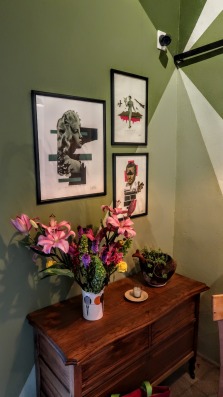 Nice dinner and talked to both Pauline and Emilio the owners.

Well today I bussed it to Colonia Reforma and had lunch at Sachi Ta Japanese hole in the wall, visited La Teca but didn’t even see a menu, then stocked up on wine and took a taxi home. 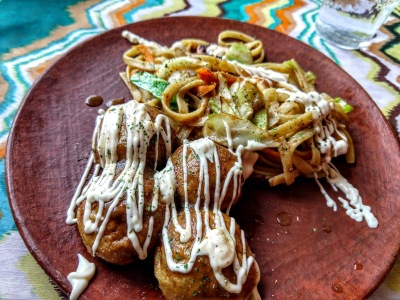 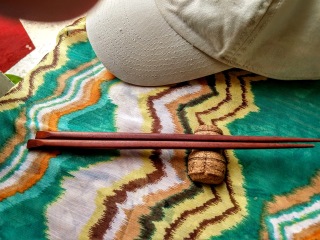 Today, Virginia, my neighbor who will be leaving soon, invited me over to see the apartment I will be moving into five days from tomorrow.  I know I’m really going to like it. Nice refrigerator, lots of light and a bit larger than mine.  The only drawback I see is having to turn on the hot water heater for 10 minutes every morning before showering then remember to turn it off.  She poured me a nice Mescal and we drank to both our moves.  She will move across town into a place but only pay for the season each year rather than the whole year.  Save some money.  I may do the same but we shall see after next year. 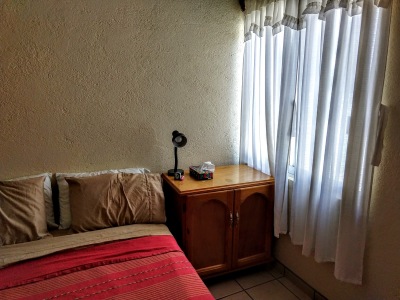 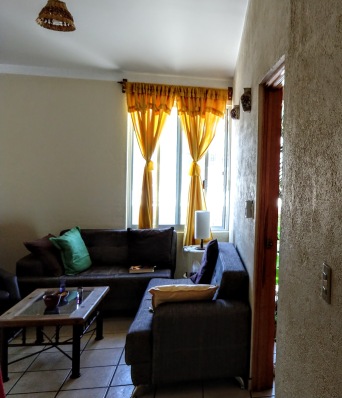 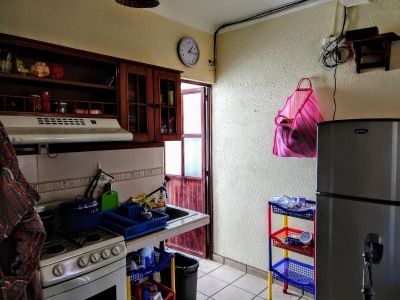 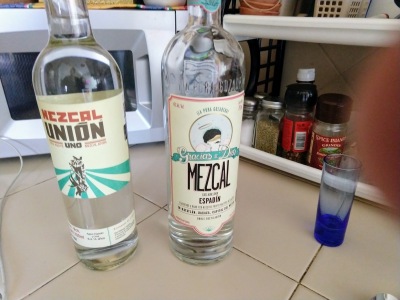 I attended my last lecture at the library for this season.  It was given by a Professor and graduate of Cornell University who was on sabbatical in Oaxaca and was the foremost authority on the Monarch Butterfly.  This was the was a lecture should be and what we expect when we pay to attend one.  He was outstanding and the story of the Butterfly and its 2000 miles migration every year from Canada, Florida, California, New York and all over the US to the same place every year that it has never been is amazing as are the Monarchs themselves.   Helen was there so we went to Biznaga for dinner then Importado for after dinner drink before saying our FINAL goodbyes and took a cab home.

I have been booking my rooms, flights and making plans for before and after my UK tour in June when a Russian double agent who had got asylum in England after a spy swap with Russia years ago, was murdered in Salisbury where my tour starts. He and his daughter died from nerve gas poison but no one knows how or who did it.  Right now over 100 British Agents have taken over the investigation in Salisbury.  My SERVAS friend Ruth in London sent me this report on the Spy’s death.
Today I meet Joan, who flew in late last night, at Mariposa where she is staying and we will have dinner at Biznaga early this evening.  Tomorrow I’ll meet her at the hotel and we will taxi to a Collectivo in the morning for 4 days in Mazunte on the Pacific Ocean.