I went to Richards this morning to play dominoes. He was out front waiting and nobody else showed up so suggested we cancel the day.  Richard has a beautiful rooftop apartment with 2 bedrooms, true bathrooms and a full Cucina. We both went over to the library and played with our computers. I left to pick up my laundry, then  returned home and had some soup for dinner.

Saturday I met Zoey, another Couchsurfer and world traveler, at the Zocalo. We had coffee together.  I haven’t seen Zoe in a couple of months. This gave us the chance to talk about our travels. Darcy stop by and joined us for a pitcher of beer. It was a nice morning but now it was afternoon. I excused myself then returned home to make a new batch of chicken soup. Richard had emailed me and invited me to dinner at at 6:30.

I joined him at Biznaga for dinner then Casa Oaxaca for nice Spanish Guitar music before last call at a close by Bar that recently changed ownership.  I took a taxi home.  The driver said the residents of Oaxaca always want the government to do for them referring to the Occupation of the Zocalo. We passed teens practicing dancing in the park at 10 pm on a Saturday night with no Chaperone’s, police, security, parents, drugs…just having fun.  That is something you don’t see much of in the USA.

I’ve been trying to schedule a trip out of Oaxaca to visit other states in Mexico. Complaining to a friend, he replied, “There are worse things than not being able to get out of Paradise!”

The library has been closed a few days due to the holidays. Richard invited me to play pool but I was moving out of Yagul condo and into my Casita Studio so Tere, my landlady could prepare for Helen’s arrival. It took me three hours to pack then unpack just 30 feet away.  Tere gave Helen a new bed in place of the fold out wreck of a couch I had been using when I surf the net. That is good because I had promised my pillow top for my bed to her but now set it up in my Casita.  My first night I woke with back ache so Tere said she would turn the mattress over and if that didn’t work, replace it.

Helen arrived that same night at Las Mariposa B and B with her two grandchildren Hannah and Sonya for two nights before moving. We had lunch yesterday at Quinque then the girls took off exploring and Helen and I walked our separate ways home.

It was early New Years Eve and I retired early to wake at midnight with the fireworks in the neighborhood.  I woke this morning to NO water.  New Year’s Day and Helen is moving over, I have no water, a sink full of dirty dishes, and we are all going to brunch in two hours?

We will bus or taxi to the Chef’s house in the North of Oaxaca for a “feast” so I’ve been told?  Richard will join us there as it is a short walk for him.
We ended up taking a taxi.  Our driver worked 5 1/2 years in Northern California, spoke great English and only charged us 50 Pesos…$3.50..yes we tipped him.  The house was a multi-million dollar mansion owned by a gay couple.  He was a Chef from France and he was a businessman of sort that I think was from Holland.  They were great Hosts. Most of the house was blocked off to keep the 80 people from wandering.  They did open the gardens for us and I got to take some photos of the bathroom Art…the little I saw of the house was unbelievable collection of Art and great modern architecture. The food and company were also great.  Nice New Year’s Day feast. 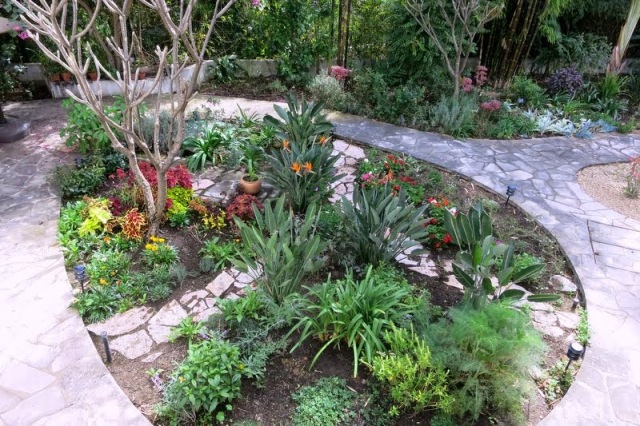 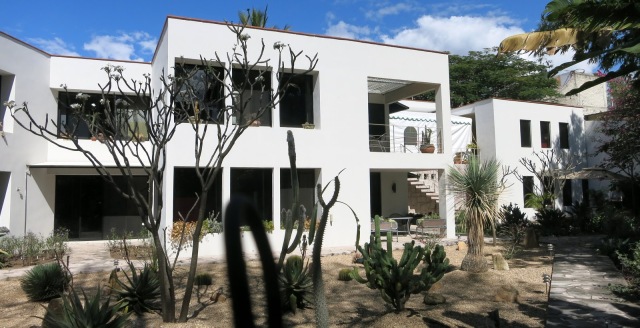