Skip to content
The plumber arrived and got the toilet fixed , floor mopped and stopped by the Post Office to Mail by daughter’s Birthday Card. I was my first time there so spotted a lady with a handful of post cards and assumed she was American so asked.  Finish tourist sending Post Cards to friends…told me where to get stamps and weigh the mail. The Postal Worker directed me to the mail drop for out of Mexico and I went to the park and had some corn.
It was dinner time so Tres Bistro was calling with a Prosciutto Pizza and a half Carafe of wine.

Took a taxi along with left over pizza and delicious chocolates …back home.

While waiting for the taxi I witnessed the Mexican stand off.  A lady made a turn down a one way street and three cars followed.  There she encountered a line of traffic going the right way on the street.  No one could back up into either intersection because the cross streets were heavy with traffic and they all would have to back up.  So there they sat just waiting.  I walked on and caught my taxi.
The next morning my ankle was killing me.  I have no recollection of spraining it but that is what it was. I needed shoes and after the weekend a doctor.  I took the bus to a famous two story discount shoe store at the Plaza Valle but the Mexicans closed it down with some demonstration about the “missing 43” , inequality in justice and pay scale…a few others thrown in for good measure.  The plaza was shut down…

I crossed the street to Sam’s Club, renewed my membership, did some shopping and boarded the bus home.
The next night, Lisa, my new friend from Oakland and I met for Comida at the Santa Fe Restaurant but it had changed hands and I thought it best to return to Tres Bistro for another Pizza and wine.

She eats with her Mexican family she stays with so shared the wine then we walked home.  We stopped at a new Mescal Bar that I was  unaware of but just opened around the corner from my home last week. She bought us a drink then stopped over for last call before returning to her “family” only a couple blocks from me.
The next day I didn’t want to try the Plaza again…when Mexicans protest it could be weeks…I’ll wait until Monday.  There was a concert…part of a series of Musical concerts with famous musicians from around the world.  I attended that at the Opera House at Noon.  It was another event that could only take place in Oz. 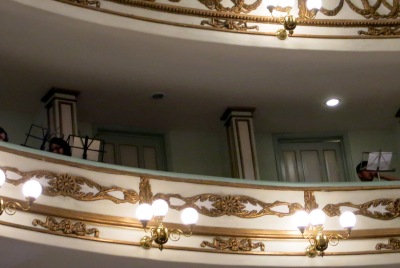 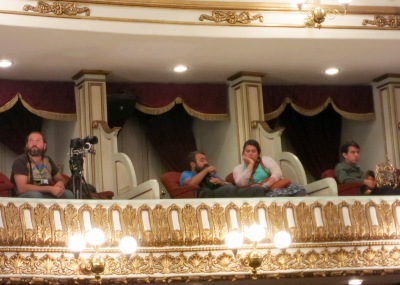 There were 14 or so Musicians on the stage.  One grand piano the rest Wood Winds and Brass.  There were another 14 or so Musicians positioned in the balcony second and third level surrounding the audience down below. They were stringed instruments, Brass and Wood Winds. No percussion. This created a lot of anticipation…what was going on.  I had never seen this before. Eight Cameraman were positioned in various locations to document this event.

The empty stage soon filled with the players, all standing up.  A flutist started lightly like a bird…then a clarinet from the balcony and so on until after about 5-10 minutes it became like 5 o’clock traffic in Mexico City on Friday.  The sound came from everywhere and kept changing as the players moved around the stage.  Some would face a wall then the audience, some would sit then stand, some would pick up a different instrument and put down the other, some would Mute their horns then not, some would exit left then re- enter on the right of the stage.

Players would stop then start…after about 15-20 minutes the “Conductor” came out from behind the piano then pointed to the musicians in the balcony and the music slowed and softened .  He returned to the piano and the music resumed it’s intensity until after about 30-40 minutes it drifted off and quieted while players slowly started exiting both the stage and the balcony one by one until the sound stopped and all were gone. The audience, some a who had walked out, clapped because it was over or because it was a very interesting experience.  I have never experience music like that and thought it thought provoking as well as a treat to my senses.