I leave Sunday morning for a brunch engagement with David and Donna , who have children in Scottsdale.  I met their son while dining at one of my local hangout.  He had attended High School here and spoke fluent Spanish.  He had traveled to Spain for a semester and now working in Arizona.  He gave me their email and we arranged to meet. When they found out where I lived, they suggested we eat at El Escondido, where Helen and I ate two nights ago.
His father showed up and we had great conversation. David was a Principal at a local school K-9 I think.  They had around 60 students. Donna is a nurse and knowledgeable about different doctors and specialists in the area.  She didn’t attend our brunch.  David struck up a conversation with an elderly Mexican dining alone.  The brunch was very good. We came over to see my place after.  They live not far from me and the school is just down the road. We agreed to stay in touch.
I took the bus into the city to meet with Courtney for coffee at three, lunch and a beer after to hear Dr Z’s group playing Beatles music at the Pescado Rock.

The coffee shop was closed so I had an Ice Cream nearby where I could watch if she came by…but she didn’t.  The entrance to her building was locked and no knocker so I went to my coffee house not far away to have coffee and lunch.  I arrived at Pescado Rock around 5:30 and joined the band for a beer.

The band was setting up when Courtney showed up.  She had forgot to reset her clock to local time, apologized and joined me for a beer and some music.  I can’t say three middle aged guys trying to sound like the Beatles was bad …well it was entertaining.  It was getting dark so I walked Courtney over to a Sports Bar to watch Seattle play football and I boarded the bus home.  It was the first time I had traveled at night in Oaxaca.
Monday I was back in  the routine.  Coffee and a light breakfast on the terrace while soaking up the morning Sun.

A nice shower and off to the library for my last history lesson.  Helen was there with her friend Gil who flew in yesterday from Washington state for a couple weeks of sun.  We had lunch at Isabella’s after and went our ways.

Tuesday Courtney and I met for coffee, then after touring a couple churches, 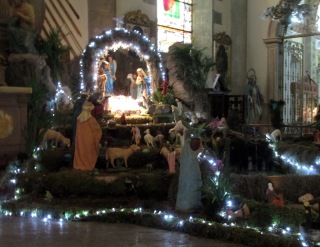 we had lunch at the local market and went shopping.  Took some photos from the roof top of her building

then finished the day at Biznaga over some wine and a Mushroom Ceviche, an original.  It was healthy and good.

My Moto-Taxi driver was born in Pennsylvania and spoke good English. No wonder.