I sent a Birthday card out today at the Post Office.  Put it in the Exterior Box for USA.

Before Spain invaded the Aztec, Mayan, and Inca Civilization Runners could deliver a message from the North to the Southern tip of America faster than a letter takes to get there today….like the Pony Express across the top of the Sierra Madre Mountain range.
Today I stayed in and am working on cleaning my stove and recleaning the wine soaked camisa I so like.  It was 4-5 pm and I just had a small piece of waffle but instead of wanting to nest I wanted to attend a “Happy Hour” with food like in Snottsdale at a bar that I can meet people.  I took the bus to Constitucion and was going to Biznaga in hope some lingering snowbird or resident would be there. I decided to branch out and explore new venues so turned down Cinco de Mayo and remembered the good food I had at Distiliro and noted a sandwich board promoting a “Happy Hour” …rare to see in Oaxaca and especially with a real bar…all 8 seats but real…with seating for another 8 next to it…full!  I found the last seat on the end and ordered the tripe menudo for $3 with a Chilcano Cocktail of Mescal, lime, Lillet, and something that made it great…for $3 then just relaxed and noted the patrons were retired married couples and read my New Yorker.  The Menudo arrived…WOW.  The flavor reminded me of the best Pozole I ever had but with Tripe…honeycombed pig’s intestines that was so tender, flavorful and filling…I toyed with the thought of ordering the Guacamole made with Sweet Potato and??? 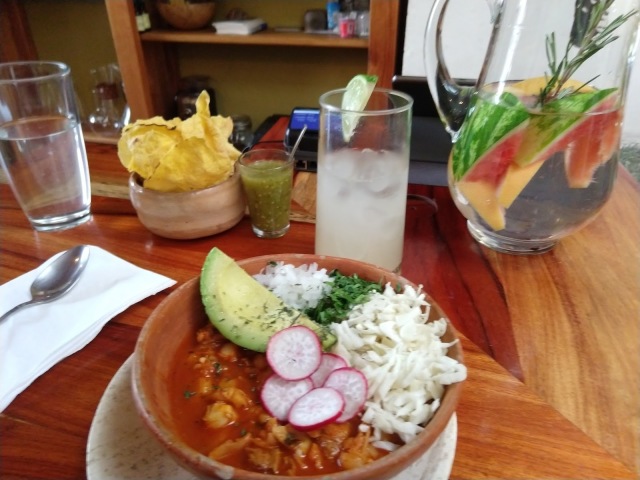 I was full and Happy Hour was drawing to a close so decided to try the only other cocktail offered for H H…a girlie drink with flowers on the lip that looked like a butterfly and a rosa drink with…artisanal Rum.  Now the bar cleared…HH was over and one man was finishing the last of his meals when I commented on the Mescal he was drinking.  The bar had NO Vodka and mostly featured distilled liquor from Mexico…as well as food. No Pizza here!  He was a entrepreneur from Chicago that was working his business for 3 week before moving on.  He also travels the world for his company and his work.  Maybe in his 50’s or late 40’s.  Did travel a bit when his dad was in the Air Force Reserve…2 brothers and a sister if I remember.  I told him my life story…all the travels and Vietnam.
He knew his Mescal and recommended the top shelve…I added that to my stomach.  Then a bought a bottle to take home.  850$…I’ve paid more and less but this was 100% and delicious.  I took the taxi home with a driver that worked in LA and spoke good English…I spoke a lot of Spanish..loose lips.  Best part of my trying to learn is to speak it all the time…so Mecal is my lubricant and Distililo is my venue for now on.
Adelina was greeted me when I came in the Gate with Teri sitting outside enjoying the warm evening.  Adelina has been dressing up of late.  Fancy ear-rings with matching skirt, nice blouse and lipstick. I think she has a new boyfriend or is looking for one, and I only just noticed it during the move??
David Chang has “Ugly and Delicious”, a Documentary series on the food channel where he travels into Mexico and discovers Real Tacos and other Mexican cuisine.  I am now getting interested too.  Before it never sparks my appetite but now!  He travels the world to try different cuisines Bulgaria, Japan, etc…interesting. 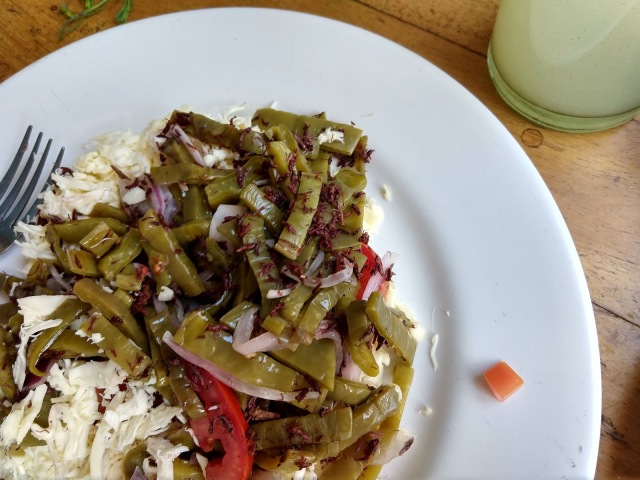 This is a Zapotec Salad after I ruined the presentation.  Shredded Oaxacan cheese, Pickled Nopales, Tomato, Red Onion and Chapulines.  Never would order it until I decided to try and it was great…couldn’t finish it all though.
This is a cone made from fried tortilla and filled with chopped blanched Hibiscus flowers with lime juice…served with fresh delicious Guacamole. Thank you David Chang.

I had breakfast at the Bakery today…

I met Hector today for Menudo at the place it was so good but he would not eat Menudo so I ordered it again but it was terrible.  The presentation sucked, there was no flavor or broth…all tough tripe.  I ordered the pickled vegetables that were inspiring and delicious.

The Sweet Potato Guacamole was blender Guacamole with too much lime served with tasty cold sweet potato chunks, spanish peanuts and rice crackers.

That was OK. Hector had the Fish Tacos…eh. 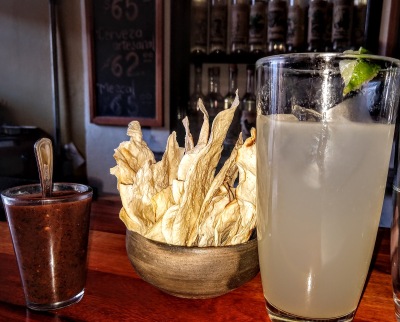 We stopped at Importado for Don Julio Tequila and Hector told me about Casa Mescal just around the corner as being the very best.  We finished the evening at the Casa Mescal Cantina with really good cross between Mescal and Tequila..called Centeron.

Today was Palm Sunday.   I awoke and was doing my exercises when I kept hearing noises…like chanting in a foreign language.  I didn’t have my hearing aides in and the windows were open so went out in the living room and looked out the window. Mass was being held in front of my condo!!!Mass was being said!   My landlord is trying to bring me back into the fold? I was afraid if I opened the drapes the large congregation would see me with my camera..in the middle of communion? 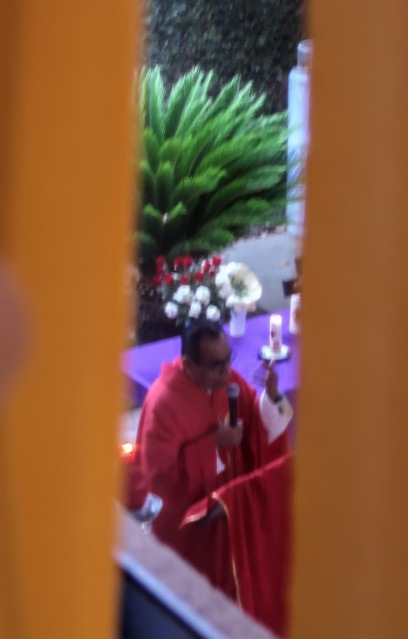 5 minutes later it grew quiet and everyone was gone…but I have no idea where they went?

I checked my email and got a notice about a folk concert at Casa Historical and it wasn’t the normal entertainers.  I was already signed up for another “Chamber Concert” at the Learning Center at the same time.  I would enjoy both but probably fall asleep listening to the French Cellist so cancelled and took a taxi to the Casa, where I’ve been for many concerts but none this year.  Jane was collecting increased admission at the door 150 Pesos. I like Jane and she has a runs a classy B and B without the AIR. It was hot and I was hungry but the features was always Hot Dogs and Hamburgs… 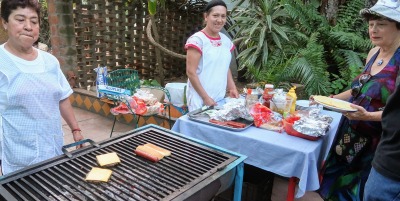 now Jane had Empanada of Spinach, Taco with Taso?, what looked like Pizza and some mushroom and cheese thing.  I had the Empanada and late the Taco with a glass of wine and what my friend and pool player Allen recommended…the best Margarita around.

It was.  I sat in the shade with another friend from Boston area…David.  He paints with acrylics as a new hobby in retirement.  His lady friend was sitting with Ed who lost his wife last year but returned this year. The music was excellent.  as well as the crowd, though small. 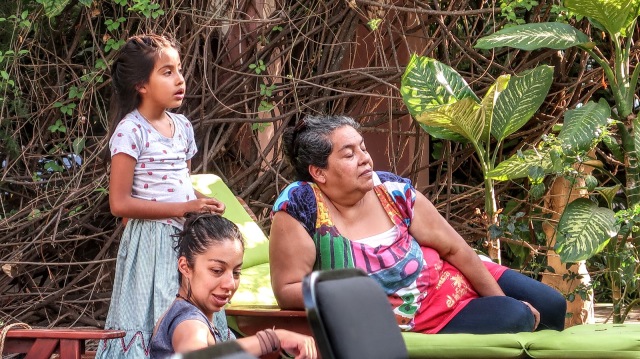 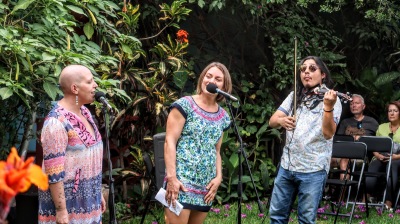 I left about 6 pm and Allen was out front in his car…I tried to bum a ride but he was going the other direction so I walked home while stopping on the way for a Crucifix of Christ and 1/2 a Roasted Chicken. 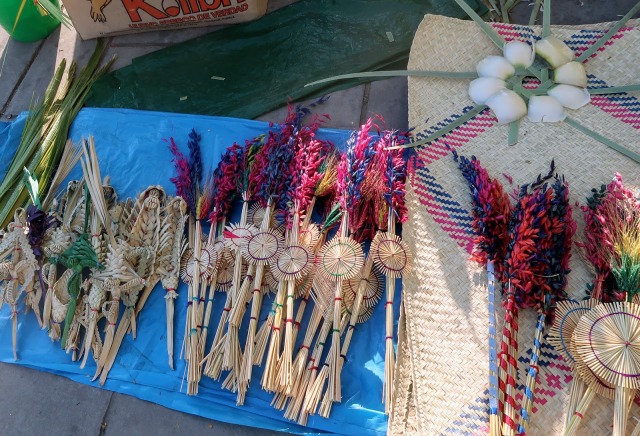 Palm Sunday families out in force.

It was early and I was sick of Netflix so turned to Amazon and paid to see 3 Billboards in Ebbing Missouri which I thought a great movie about small town america and our ethics.  I love Woody Harrelson but he is putting on weight…it’s the Marijuana…I know.  But the star was Marilyn or Margaret…who did a brilliant job in Fargo.  She was great. The movie was a little exaggerated in places but great.

I played pool today with ‘Christopher Stowens who is also a Oaxacan Blogger and a really good one. He lives out in the villages and attended Palm Sunday procession that was quite impressive:   I HIGHLY RECOMMEND HIS BLOG ON PALM SUNDAY and Shannon’s VIEW FROM CASITA COLIBRI