I have the weekend free from Spanish lessons. I walked to Biznaga tonight for Salad,Soup and  two nice glasses of Mexican Merlot…all for under $20 and too much to eat.  I took most of the chicken salad home.  No Phone no Camera No photos.
Stopped at Importador for a Don Julio Tequila.  I have never seen a night in Oaxaca with so many parades, bands, weddings, funerals, and events going until wee morning.  It was crowded, noisy and lots of fun.  Gerardo, one of the waiters, lived in Northern Wisconsin for 12 years after migrating there to work.   Snow country.  He is in his 30’s and was deported with his family just this year.
I passed by a vagrant glue sniffer inhaling his bag as I passed.   First time I have seen that in Oaxaca….Macedonia, Romania, Bulgaria…yes especially among the Gypsy’s. I still made it home by 9.

There was so much Chicken in the leftover salad I just added it to my Homemade Vegetable soup for Breakfast.  I dropped of my laundry but they are so busy she said I would have to wait till Monday instead of the usual 5 hours.  I walked on to a Tienda to buy some Pineapple/Mango Jam and ended up with a jar of Peaches too.

Mother and daughter from Octalan. Stopping off at the Pablo Cultural Center they had a sale on handy crafts and I added a belt to my shopping bag from another Mother Daughter from another village.

One more stop at the phone store to buy a replacement charging cable for my phone.  The last one was defective. On the way home… 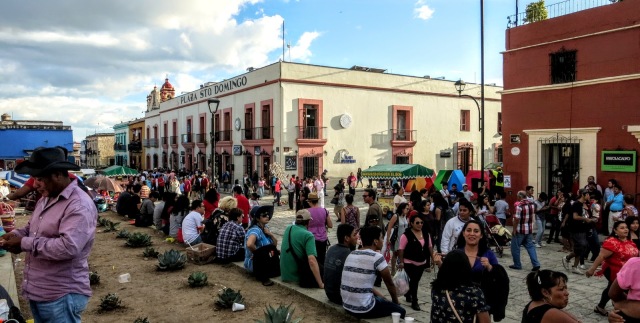 I arrived home to find out my daughter may not be coming to visit in two weeks as her sprained ankle doesn’t seem to be healing like the podiatrist predicted. I’ll know by August 1st.
I returned to watch the parade but the crowds were so congested I couldn’t move and more kept coming with at least another 1/2 hour before the procession reached us.

I went to the Importador and watched the world go by while hearing the Rockets and Fireworks from the parade.  I finally broke down and bought some Nut Candy from this lady with the most beautiful smile and her son that hauls the candy around on a large display tray. 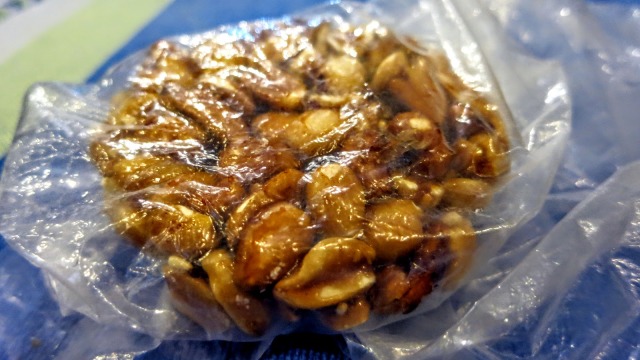 I was in a buying mood and hungry so ordered some Vegetarian Lasagna.  It was delicious.

While I was eating I observed a young lady…and there are a lot of children working every night and day…trying to sell this lady.

She gave a sincere pitch, listened to the lady’s objections then responded and made the sale.  As she left she made the sign of the cross.  When they make the first sale of the day, they do that to give thanks and hope their will be more sales.  It is a compliment as a buyer to be the one that made that persons first sale because she is asking God to bless you too!
On the way home I passed an attractive lady that stopped me in my tracks.  I looked back and she was inviting me with her beautiful eyes.  I carried her image home with me along with a long forgotten fantasy.

I took the bus to the Organic Market where a Clown entertained us. 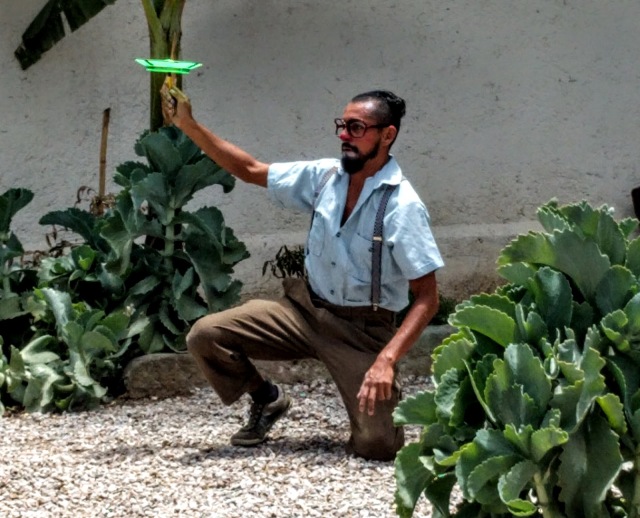 I bought some Green Tomatoes, Cucumber and Elephant Garlic before leaving.
I then  visited the Stamp Museum and bought some Chocolate and an Argentinian Spinach and Feta Cheese Empanada to take home. 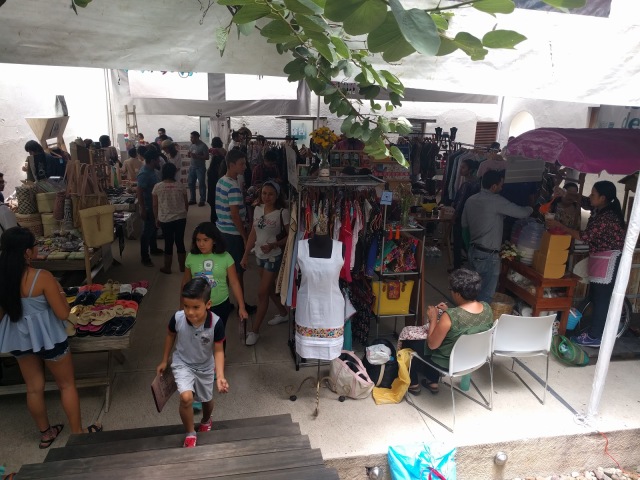 A band was playing when I came out. Checking out the events of the day, I discovered a friend of mine who has a band is playing a the Pablo Cultural Center at 4 pm.  I was going to dinner at 3 pm to Arte Comible , a gourmet Italian Restaurant but my date emailed earlier to say she couldn’t make it and would like to try next week.  I agreed and took the bus home to freshen up before the concert at 4 pm.
I caught up a bit then took off for the concert.  I arrived at San Paulo Cultural Center early and the Artisans were still set up selling their wares…so I bought another belt from the same lady.  I liked the quality , craftsmanship, weaving pattern, natural dyes, and the fit is good.

There were but a few when I arrived and I could hear Emilio, my friend that owns the restaurant Sol y Luna,  in the back tuning up so I popped in and said hello.  Ten minutes later he came out and reviewed his plans for tonight’s concert.

The group followed and soon they played to about 60 people.  It was like pieces from classical orchestra compositions for a horn section.  Listen to Bandia del Sur for yourself.  Sound quality on a camera is not good.

I decided to go right home after because I had forgot my key to the front gate and wanted to get there while everyone was around to answer the door for me.  Well no one was around! I spotted the owner Elisandro and his wife, Theresa out walking in the street.  She had been sick so he’s been back taking care of her.  I went over to greet them but before I could ask if anyone was there to let me in, he reached in his pocket and handed me his keys!!!   I was astounded at his intuitiveness and amazed.  I thanked him , arrived and let my self into an EMPTY compound.  I have never in two years seen that.  Later that evening he arrived with his wife’s keys and yelled up for his with a smile.  I love Oaxaca.

Monday I was back to my morning lessons and it was the last day of the Guelagetza. I stopped at a Sushiitto that Tom had told me about.  It was quite good.  I had some Shiitake Mushrooms and Soup. 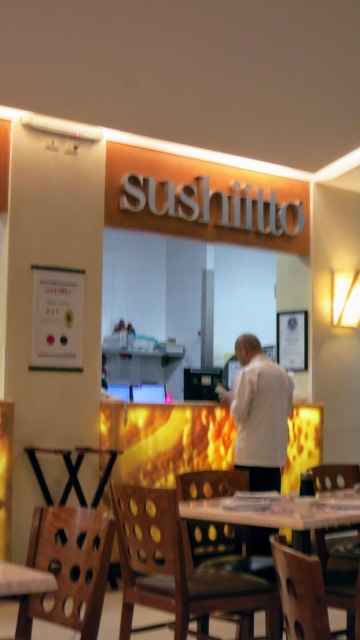 Later that evening I had one of my favorite dinners.  An Avocado, Orange, and Tomato salad with Olive Oil and Balsamic Vinegar …Sea Salt and Ground Peppercorns.

When the last performance of the Guelaguetza ended the fireworks began…I went to the roof but out local fireworks ended so I tried to capture the FIREWORKS
The next day, Gadi came to my condo to give the lesson.  It was easier for her and better hearing for me.  I returned some shirts to the store that was next to the Sushi Place so ate Sushi Rolls on Special…2×1 .   Cost $6 includes tip.

The carnival was still going on……

Wednesday Gadi was late and as she was leaving to meet her Mother, the rain started very lightly.  I offered my umbrella but she felt confident in her wide brimmed hat that she would be fine.  Just after she departed the rains increased along with the winds and a huge drop in temperature.  I changed out of my shorts and put on my flannel shirt…still the rain kept coming until an hour later it cleared and the sun came out.  I left for the Tamale and Tejate Festival.
The temperature by the time I arrived had returned to 80% and the place was crowded.  I got a Tejate (Mayan beverage made from Maize, Coco Beans, Spices, Pepper and more that is made into a paste then brought to town and water added to complete the drink) to drink. It takes over 3-5 hours to make and was a favorite of the Zapotec Kings.  Very nutritious also.

There were the usual street performers on the way home 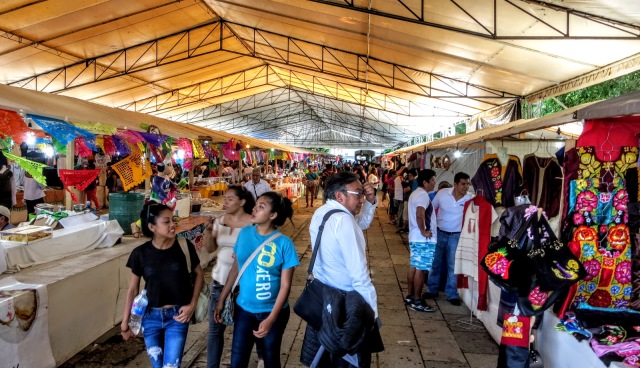 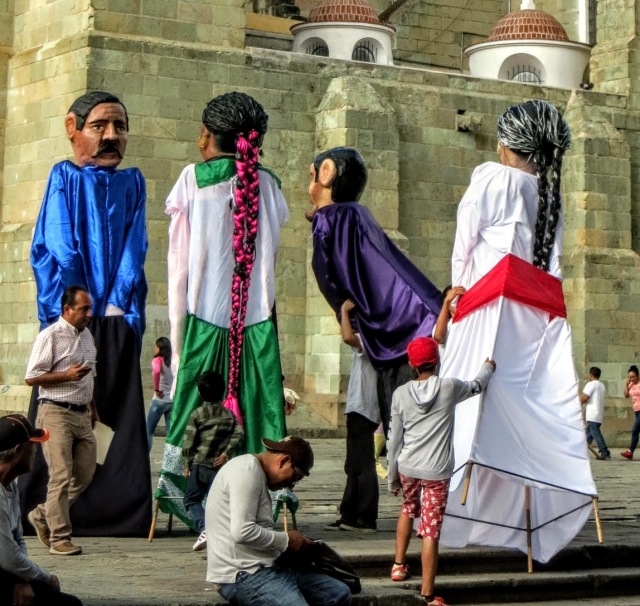 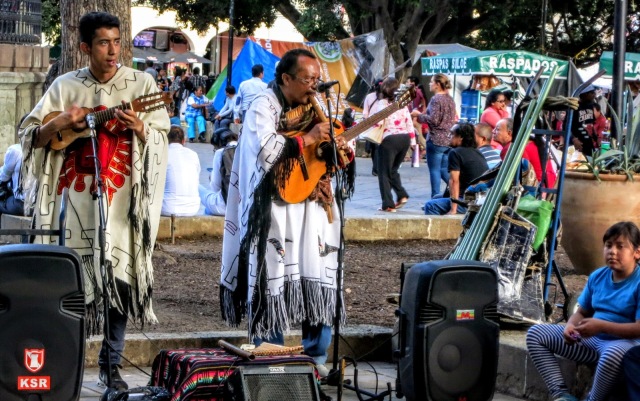