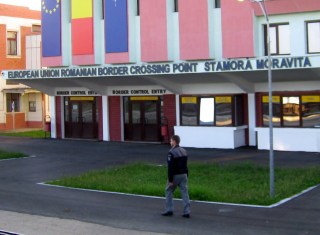 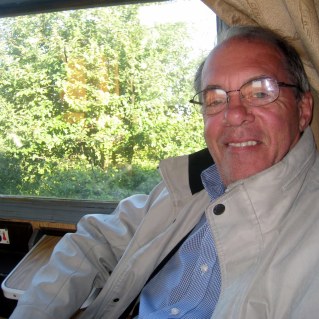 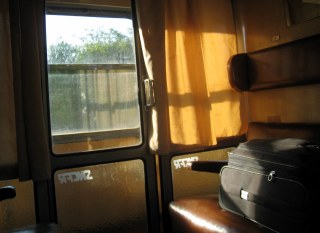 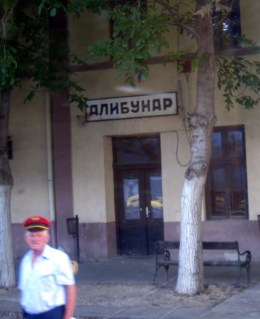 Waking at 4:30 am is not how I usually start my day.  There appeared to be a full moon out.  Romania being the birthplace of Count Dracula, “Devil” in Romanian, could be an ominous sign?  Taxi was waiting and I noted a few people getting out of taxis at 5am that were still having a party.  As we drove along I counted three police check points for drunk driving.  No vehicle except Taxis were let through and there were cars being impounded and people being arrested at every check point.  This is 5 am! Yes it was a Friday but in Phoenix I think the check points would be down at 5 am…maybe because here I don’t think there is a closing time.  People can openly drink on the streets also.  We reached the train station and  it wasn’t long after when the train arrived.  I had an assigned seat in an 8 seat compartment.  So did 8 members of the Partridge family.

We managed with Mom and Dad opposite with a daughter and both boys, the oldest and youngest of the lot. I sat with the other 3 daughters.  The whole family were handsome, relaxed, conversed and laughed a lot.  They shared food with each other and me. They were respectful of each other and me. It was truly a pleasant experience.  They were like my neighbors back in the fifties that I used to play with and stay over at their house. You liked them so much you felt for them. You knew someday they would suffer a hardship, the father would pass away, the mother would get sick or some accident would cripple one of the children.  You worried for them because they were such nice people you felt for them. They got off at a village just after we crossed the border and I was feeling lonely in the compartment by myself. 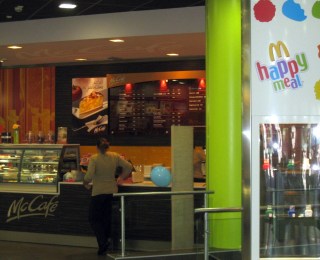 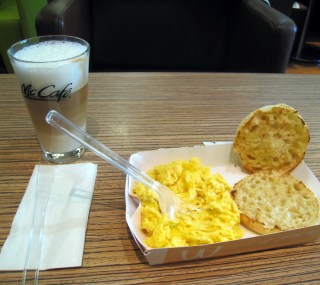 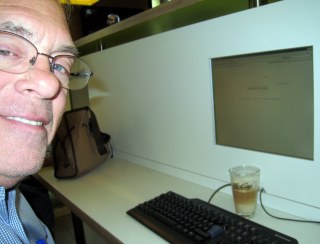 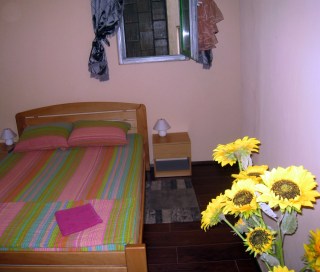 The train entered Belgrade along the Danube.  The station was close to the center but I wasn’t familiar with this area so walked to my Hostel with a stop at McDonald’s McCafe for a Latte and Breakfast.  This McDonald’s not only has the Free Wi-Fi access but four state of the art computers to use free of charge, a wide screen TV , a separate downstairs dining room, the outdoor terrace , as well as a comfortable lounge are like Starbucks. All Air Conditioned.

I was welcomed at the Hostel Montmarte by a gentlemen who inquired if I was David Taylor. That was nice since I was 3 hours early for check in.  His name is Dusan.  He speaks English, French and Italian and worked for a French tour company in Vietnam for 6 months taking people on river tours to villages and tours of Saigon. He gave me a brief tour then after showing me a lovely room, requested I join him for a welcome gift?  Nice touch.  The gift was a welcome national drink Rakia that was chilled in the freezer.  He poured us each a shot and offered a toast for a pleasant stay.  Then he introduced me to his knockout sister, Jelena, after I said I was from Phoenix.  She was a fan of the Suns, and an international women’s basketball gold medal winner. Basketball star Jelena Milekic Serbia Women’s team played the US.  Didn’t get all the details but she looked very athletic as well as attractive. The Hostel is done in a lot of Red .  The entrance door is Red, red trip around the halls.  Red Heart bath mat and red hearts on white for the shower curtain.  Rainbow colored bed cover, Pink shear curtains .  Wide screen wall mounted Cable TV. Posters of Paris with Scenes of the Montmarte area.  Nice wooden antique chairs with red velvet cushions…very feminine or gay? Centrally located and air conditioned. It is very much like the 3 star hotel I just left but better I think.  It is about $5 more than the one in Timisoara at $45 a night.  I wanted to be comfortable my last days in the Balkans. I know this neighborhood and might go to the Bohemian section again and maybe the Casino down by the Danube…an area I missed last time. 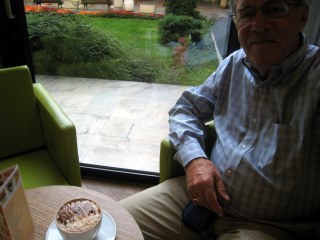 The night desk clerk greeted me “Good Morning Sir” and presented me with my clean laundry.  Never mind that it was just thrown in a bag when it came out of the dryer in the night.  It was clean and wrinkled. Sunday morning in Belgrade is quiet and not much was open.  I wanted something more than the cereal I had for breakfast so went to McDonald’s but they were closed!  I forgot to reset my clock to Serbian time zone.  I found a Cafe open but like most, they only serve beverages.  You can’t even get a bag of chips with your beer or Croissant with your coffee.  I returned to McDonald’s after my coffee and had an Egg McMuffin. Dusan was at the desk when I returned to the Hostel and explained how to get to the Casino and where the good restaurants in the neighborhood were located. 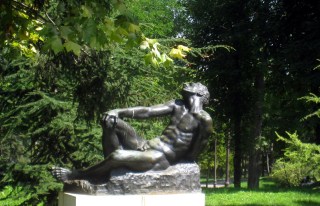 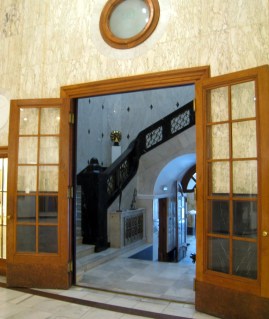 I meandered around the main Rodeo Drive to the Park on the end.  Visit an Art Plaza in the park but decided to forgo the Bohemian Section and restaurants until tomorrow.  I found an Art museum..The Zepter and it was nice.  The building was art deco style and the museum was laid out on three floors.  I decided to have lunch on the strip and ordered the Chef’s Surprise Pizza…It was a Surprise!  It was a Pie. about 5 inch tall and a good 12″ around.  I ate half and took the rest back for dinner and breakfast.

The Montmarte is the perfect location and as a result, I believe will be very successful and expand into more along the same lines. I step out the door and there is Republic Square…a central meeting point like the clock at Grand Central Station in NYC.  People meet under the clock or the Monument in Republic Square.  You can sit there and watch the drama unfold. Will they show or no.  People on the cell …Where are you. During the short time I was there , one man was stood up.  Four women met women and left arm and arm. One woman met a man.  Very few men wait for anyone.  It is 90% women waiting.  In the US, it’s the men that are waiting.  Women are afraid they will be mistaken for prostitutes sitting around alone. .Another thing is I have only seen butter served once, I can not get any newspaper or magazine in English in the capital of Serbia, more than one napkin is seldom , sometimes more than 3 sheets of toilet paper is hard to get, toilet paper has been mostly one brand no matter where, service is usually slow if at all, and I asked for lots of ice today and got two ice cubes , never to see the waiter in almost an hour. I guess they think that we think we are special because were Americans or something.  They treat all customers like that?

It will be nice to be back in Amsterdam tomorrow for lunch.  Milko, a friend in Germany invited me to his country home about 4 hours out of Amsterdam.  I think a day or two in the country would be nice.

My last night in Belgrade I was still eating my Chef’s Surprise Pizza leftover in the Hostel refrigerator.  I wanted to eat out at the restaurants Dasan had recommended and thought maybe I would have an appetizer.  I walked the exclusive part of the Old City with chic cafes and restaurants on every corner.  Douma, Balzac, Dorian Gray, The Witch Bar, The Nude, The Little Box, and ended up at Momma’s Biscuit House for a Gin and Tonic.  The Bulgarian Restaurant was really unique but I wasn’t hungry and no one was there this early. I left my camera at the Hostel.  I wasn’t expecting this. I felt like I was walking NYC Village.  Wabi Sabi a Concept in Living store grabbed my attention.  Maybe if I was rich?  Lots of BMW’s Jaguars,Rovers, Mercedes, this was an upscale area…a lot of Gypsy begger children…they know where the money is. I came back through the Bohemian Section , had the last of my Pizza and retired early. The Hostel had called the taxi for 5:30 and woke me at 5am.  I made the hour ride to the airport in about 17 minutes at just under 90mph and was checked in immediatly.  Nothing to eat except day old rich pastrys  and premade sandwiches. They call Thailand the land of Smiles…I call the Balkans the land of Grimaces.  Turkey was the only place where I thought the general populace was friendly and smiling…not for long  if the president keeps up his “reforms”. Hello Amsterdam!

One Reply to “Back in Belgrade”