Leaving Varna the Taxi dropped me at the bus station.  I was headed for Ruse on the border of Bulgaria and Romania with a small Mini Van waited to transport me to Bucharest, Romania.  The bus was to pick me up at Gate 8.  I saw no sign to indicate Ruse until I figured out Pyce is Ruse in Cyrilic.  Bapha is Varna in Cyrilic.  You can see how traveling in the Balkans can be difficult at times.  The bus was full and the seats were for midgets.  I was straddling the seat in front of me when another gentleman sat in the seat next to me.  He had to sit crossways with his legs out in the isle because I couldn’t move. Three hours later we arrived in Ruse.  I had to be pried out of my seat but managed.  I saw the office of the bus company that Stanmier called in Ruse and made my reservation.  Yes David we were waiting for you, 20 Lev ($12) and I was following the driver to a little mini sports vechicle with two rows of seats for 3 in the back and me and the driver in front.  There were 6 of us and luggage!  He managed to get us all in but I felt back for the guy and the lady in the far back seat strattling the luggage.

There was a man from Bucharest that studied school in Amsterdam, an Indian couple that lived in Amsterdam, and the couple in the back were so uncomfortable they said nothing the whole trip.  It was hard to say anything because the guy from Bucharest would not shut up the entire trip.  I noticed the driver kept turning up the radio as we went alone, hoping to drown him out or shut him up but no luck.  He talked about cruelty to caged chickens, the unfair left over Communist politicos, his girlfriend in Japan, and so forth.

We turned our passports over at the border check point and the border guard returned everyones, except mine.  He then told the driver to pull over.  We waited about 20 minutes in the heat until finally they returned my passport and  about one hour later, we arrived at a parking lot in Bucharest.  I went over and naievely asked the taxi if would take me to my destination.  Never asking how much!  I first went to an Exchange Office and turned in my winnings of Bulgarian money for Romanian Livs…I didn’t bother to see  how many of these equalled a dollar so had no idea what the currency exchange was.  We arrived and the meter said 9 so I gave him 10 and he said no 90!  So I gave him 90 and checked into the hotel.  That’s when I discovered I paid him around $30 for a $9 trip.  The manager told me a nice young couple arrived at the airport and took a taxi.  He offers pick up for 20 Euro and would have picked me up at the bus station for 7 Euro.  The taxi charged them 170 Euro!   I have a nice room with a fan but the internet can only be accessed in the lobby. 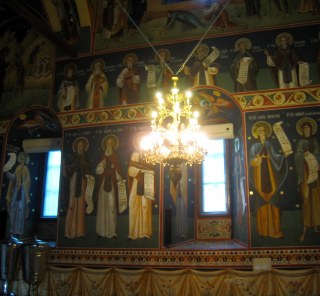 I showered and took the Tram to Central Bucharest, where I had just came from…for 1.3 Liv or .50 cents.   The last stop is St George Square where the church is and the center of Bucharest.  I wandered around until I found the “Old Town” where a few blocks of the historic area was being restored and eclectic bistros and clubs were moving in.  The streets were all dug up and it was dusty but there were lots of people, music and good food and drink.  I tried some Pork Stroganoff with rice that sound and tasted good but was mostly all fat.

I returned to the Hostel, got on the internet and booked a room for the two remaining days in Timisoara, North of Bucharest, before I left for Belgrade. I choose take the train.  All trains to Belgrade…all one of them go through Timisoara.  It is a night train and I’m not sure I want to do that.  Despite the last cramped bus ride I am hoping I can find a first class company that will provide a day trip to Belgrade so I might see more of Romania and Serbia. I have to find out what the bus schedule to Timisoara tonight and maybe even get my ticket.  I was told by the Hostel owner that the bus station…one of four , is within walking distance from here and has frequent buses going to my destination.

The Van Gogh restaurant in Old Town offered a nice breakfast so I treated myself the next day.  I found Tourist Information and got myself a real map and some directions.  I did a brief walking tour before boarding a Get On/Off bus with another man I met at the bus stop from Toronto.  Claude Ryan was a traveler also.  He just arrived yesterday from a 10 day trip through Russia and loved it.  He is a couchsurfer and stayed with CouchSurfers as much as possible. We both took some pictures but really just took the tour to get a feel of the city.  I got back off at Old Town and stopped for some Mint Lemonade and to cool off.

I hopped the Tram back to the Hostel.  I noticed that everytime the Tram went by a church about 10 people would all put their head down and bless themselves.  I remember in our parish back in Attica we were supposed to bless ourselves everytime you went past the alter of God…in  otherwords each time you passed the church.  That didn’t last very long yet these people take this seriously.  They do the sign of the cross at least three times and close their eyes.  We pass about 5 churchs on the way and sometimes you think they are celebrating Mass on the Tram!

I got on and it was crowded but there was one seat available.  There was a young lady standing next to me surrounded by four other people.  Normally on a full Tram, there is a scramble for an empty seat.  I was waiting for the lady to take it when I realized they were all waiting for me as I was the eldest.  I took it. There was a young man sitting in the seat in front of me and an elderly lady approached him and requested that he give his seat to her.  Now it wasn’t a matter of being polite, it now became her RIGHT to that seat.  He stood up to give it to her while she was admonishing him another man next to her took her seat and wouldn’t budge.  She went across the aisle and requested and recieved a seat.

I was hot and sweating after riding in the Tram and then walking back to the hostel about 15 minutes away.  A nice cool shower but now I have to go back out there and get a bus ticket for tomorrow. I think I’ll take a nap.

View from the road

The road to the Bus station was a lot longer than the Hostel Manager made it sound.  It was hot and I was again covered with sweat when I reached what was a huge bus repair terminal.  I walked around the other side where some local buses were picking up passengers and inquired with one of the drivers about getting a bus to Timisousa.  He said all these buses were local Bucharest buses and I had to take #85 to Gar Nord, the train station to get to Timisoursa.  I did and got my ticket.  Then I tried to return but construction confused me and I couldn’t find a pick up point to return.  I wanted to go to Old Town and have dinner so finally decided to take the Subway out of the Gar Nord. I had to get off at one point and transfer to another Subway but it worked fine and I made it for dinner at the Van Gogh. I returned on the Tram and planned my departure tomorrow.  I would walk to the Tram then get off at the connecting subway stop that would take me to the Gar Nord for the 12:45pm train to Timisoursa.  It was frustrating but satisfying day.