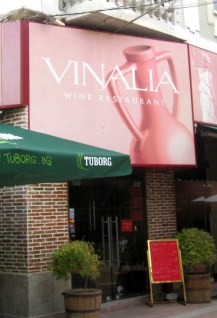 OK the bitch from hell didn’t fire her slave.  Thank God…she makes great coffee.  The only thing at the Orient Express Hostel I enjoyed.  I booked the Plovdiv Hostel ASAP and took a taxi to the Bus station, bought a ticket to Plodiv for $10 boarded, fell asleep and woke in Plodiv.

This city goes back to 670 BC or thereabouts.  I took a cab from the station to the center and found my Hotel with AC, a Refrigerator, private bath and daily maid service in the center of the Old Town…I booked another day immediatly.  I was on vacation from my travels!  It was heaven. The last night in Sofia, the nightly fireworks display at 10pm was followed by a real fireworks display of Thunder and Lightening most of the night.  I closed the windows to sleep.  Tonight in Plovdiv while eating at the Vinalia Wine Bistro it started to Thunder again.  It was refreshing but still no real rain.  I finished early, picked up a map at one of 20 Casinos in town. Bulgarians seem to take life very seriously.  They are intellectually focused and seldom smile or especially laugh.  Kind of like the Germans. My tour guide in Sofie did have a dry sense of humor but at least she make a joke once an a while while smiling and managed a laugh.

I’m walking to the train station tomorrow and make sure I have a ticket for Istanbul on Thursday Night.  I hope to be over this cold or flu I’ve been nursing for over two weeks now. My throat is still sore, I’m still coughing and my lung is still throwing up green glue.Speaking of that, I’ve seen gypsy children around 8-13 years old , openly sniffing glue or paint in a paper or plastic bag in the public squares in more than one country in the Balkans.

I had breakfast , then booked a free tour for the following day.   The excursion to the Train Station was no easy task.  The walk was pleasant but trying to find out how to get into it and then buy a ticket was an experience.  There are two bus stations and a train station in the the same area with a super highway / boulevard separating them.  There is an underground maze of shops and entrances and exits that connect all of them.  I finally managed to get to the train station information in the lobby.  She told be I had to cross the Boulevard to  to the ticket office across the street and gave me the address.  I finally discovered a breach in the wall separating the high speed traffic that ran down both sides.  Got to the center and finally made the other side without becoming road kill.  Finally I found the hot office with no ventilation and a one lady who informed me the train was full tonight.  I explained I wasn’t going tonight and she said it was full tomorrow too.  I said I was leaving until Thursday night and she seemed disappointed that she would have to sell me a ticket.  Thirty minutes later I walked out with a ticket on a bottom berth on an overnight train to Istanbul.  If it is close to the adventure I had finding the station and getting the ticket, it will be interesting.

I walked back to the hotel stopping along the way to treat myself to an Ice Cream and Cafe.  I also replenished my medicine for the sore throat and cough, took a shower, paid the hotel bill and left for Terry’s Irish Pub. While I was paying the bill , a gentleman overheard me and told me he was from Louisville, Kentucky.  He is a resident of Turkey now where he has worked the past few years.

Terry’s Irsh Pub was called the Global Bar.  Nice name Terry but no one was there. It was around 7 pm and I walked a distance to hopefully find someone to talk to in English.  I returned to have dinner at Hemingway’s.  Big mistake to eat at a chain restaurant.  The food was eatable…and that is all I can say.

The following morning I went right for the tour at the Tourist Information.  It was scheduled for 9:30 but after keeping us standing around in the hot sun they finally started the tour at 10pm.  Two and a half hours of not understanding the tour guide and climbing hills…mountains on cobblestones…I was ready to have lunch.  I came down off the mountain with no directions from the guide and was lost, hot and tired.  I finally took lunch at the Vinalia where I ate two nights ago. The Chicken soup was room temperature but really tasty , then came the Bulgarian Specialty of Stuffed Peppers with a cream sauce.  It was cold or also room temperature which I didn’t expect but figured that is the way so I ate it.

Then a quick nap and I was off to the Casino for a Texas Holdem tournament.  It turned out there weren’t enough people so I wasted $10 in a slot and left for dinner at Happy’s.  It made me Happy!  I had some wine at a very cheap price, then ordered the Shashimi special with 6 different fresh raw fish marinated is lemon and served with soy and ginger…to die for! I ordered some California Sushi Rolls after then had a Sushi Dessert wrapped in chocolate with coconut instead of rice and candied Papaya and Mango center!  Another winner.

Now I felt like playing Texas Holdem.  I went to the ATM then on to the table and bought some chips to get into a regular game of all in Texas Holdem….then I went to the ATM and did it over again. I finally got it right and after 3 hours at the table I managed to have a great time with my Bulgarian friends…get all my drinks for free….and only lost about $50 in the end.  I won most of the money back on Roulette playing Black Odd as I was leaving. A ploy I often use that seems to work and enable me to spend a lot of time having fun for almost nothing. No Blackjack was available though I was told if I requested it they would provide a dealer.  I did …they didn’t.  It is hard to make any money at a Casino run by the Russian Mafia in the Balkans or the Baltic’s or Poland, Hungary, Czech Republic,…well you get the point.

Well I spent the day catching up on emails and booking my air ticket to Buffalo when I return.  I was going to return to the Casino but instead took a walk to a club that offered some eclectic choices on the menu.  I checked out at 5pm and left my luggage in storage until 8pm when I’ll take a taxi to the Train station for my 9:10 connection to Istanbul from Sofia.  I am not enthused about that part of the trip as it is hot and I don’t think I sleep well in a bottom berth on an all night train that stops at the border for passport checks…we shall see.  Right now I’m sitting at the Art Club in the outdoor Terrace working on my blog. The cold yogurt soup and wine was great. Now enjoying a double Illy Espresso with Chocolate Mouse while listening to Internet Sky Jazz Radio. A treat before I depart.  Yes the whole city has Free Wi-Fi connections!

I can get Internet Connection but no cold bottled water here.  I’m on the Track with another 30-40 minutes to wait and a young Japanese girl to keep me company. This is going to be hot if the train is not Air Conditioned.  There is a breeze out now but still hot and humid. The Taxi driver told me he would take me for 70 Lev…I paid 50 for an all night sleeper with a border stop.  He could have had me there in less time but the Taxi was hot too.  Everything is Hot …can’t wait to return to cool Arizona.  Two hours later I decided to call Bruce on my Sky network on the computer…it was like he was right there in the train station. Amazing. I played Texas Holdem until my battery ran down.  Where is that train.