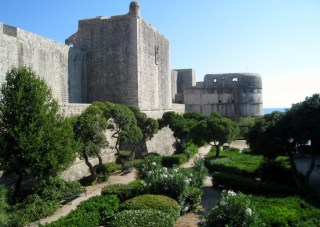 David met a oouple from Connecticut at the Mostar bus station that were headed to Dubrovnick on the same bus.  They were on a 5 week vacation.  The first two were spent at an apartment in Portugal near Sintra? Then they traveled on to Paris to visit their son .  He was taking classes at the Sorbonne to open a business in Paris.  He and a couple of his friends suceeded beyond their expectations and in March 2011 opened a Mexican 20 seat restaurant with a 4 STAR Michean Chef .  The restaurant garnered rave reviews and was written up in the NY Times.  It has been doing a bruque business ever since and venture capitalists are flocking to them ready to invest in their next restaurant creation.  The Michelan Chef , who I assume garnered big pay also negotiated part ownership.  Seems to me he has a lot of partners to share this wealth of profit from a 20 seat Mexican restaurant.  Personally I would never eat Mexican  in France but who knows.  They left their son and ended in Sarajevo staying with friends from there.  He commented the countryside from Sarajevo (which they flew into from Paris), to Mostar was beautiful.  No arguement from me.  All of the Balkans , so far has been beautiful…in the countryside.  That includes our 3 hour trip to Dubrovnik.

My arrival was confusing.  The directions I recieved from the Hostel were one if I was coming by plane which I wasn’t and another by Bus, which I was.  The bus directions said take #7 but never said where to get off.  I wrote before leaving and requested more explicit directions but just got a message saying “see you tomorrow?  I went to the bus stop and showed a lady who spoke zero English the address in Lapad…a suburb of Dubrovnik.  She  mimed that she was going there so I got on her bus, got off 3 stops later and got on the next bus with her.  She said I had to get off and another lady said I was in Lapad and should get off now or the bus was turning another direction.  I did  but none of the surrounding area looked like the directions to the Hostel.  I stopped and asked a restaurant owner and he called the lady.  He said I had to return to the last stop, and go up the mountain toward the Church about 300 meters.  That was a lot of up hill in 90 % heat carrying everything so I waited and used my bus ticket to go up one stop where I saw the Cafe Teatre which was described as near by.  There a waiter knew the street and gave me more directions to climb up hill.  I finally arrived but was on the verge of dehydration and the owner knew it.  She brought me water and sat me down.  30 minutes later and three glasses of water, some fruit and then some coffee…I was coherent.  She showed me my non A/C room , said she had no internet access and my room was double the cost of what I agreed upon when I booked it.  I had no printer available so nothing in writing and no access to the internet to show her my saved copy .  I was stuck, it was almost 4 pm and my plans were to leave tomorrow but I didn’t even know where I was going,only that I wanted to be in Montenegro.  She was a nut case and everytime I asked her something like what bus stop and what bus do I take to Old Town…she would start telling me “later”, and what a busy day she had.  Then she went on about how normally she only lets people stay for minimum of three days so I had to pay full price .  I said I want to take a shower and go to Old Town before the day is over.  Finally I paid her almost all I had in Kuna , took a shower and she walked me to the area  to direct me to the bus stop promising me a fan for my room.

I boarded the bus but the driver said I needed another $3 for a new ticket as the other was expired already. I  arrived at the main Gate of Old Town, got a International bus schedule from Tourist info along with a good map to follow.  The ATM gave me more Kuna for the evening and I entered the gate.  Dubrovnik is the Jewel of the Balkans.  It is truly a beautiful city as well as a Port.  I walked the entire circumfrence of the city on the wall that surrounded it.  All 747 steps.  It was grueling for me but breathtaking.  The city inside the wall was coming alive when I finished.  It was around 7 pm and all the Cafe’s were bustling with business.  I walked a lot of the city while taking pictures before settling on Spaghetti Tonis and ordered a half caraffe of Croatian Red and a Pasta I wasn’t familiar with that came with Olives , Fresh Anchovies, and basil topped with grated fresh Parmesan.  Toni came out to say hi.  The waitstaff was tops and the food was excellent.  I treated myself to an Ice Cream, took the bus home, and demanded a fan.  I got it and showered again…got to sleep for I can’t miss the Bus to Kotor…I already booked my most expensive room in a hostel…for two days.  I need a rest.