Hey, I think we have something in common said the gentleman on the transfer bus
to the Airport.  Looking at him, I noticed he was carrying a computer like me , and
asked what we had in common.  You and I were in Vietnam.  Then I remembered I had
my  Army fatigue jacket with the Vietnam Emblems on it….it’s cold in Buffalo in
November.
After changing planes in Detroit I arrived in Buffalo, claimed my bag, and was
waiting for Bill, my ride.   An oriental man dressed in a Black suit with a Black shirt,
approached me.  When I looked up inquisitively, he saluted and introduced himself as
a Captain in the ARVN forces assigned to the 101 St Infantry. He served from his 18th
Birthday in 1968  until we abandoned him and his comrades in 1975.  He fled to Canada
as he was bitter against the US but 30 years later got over it.  He moved to Houston
from Toronto where his son enlisted in the Marines on his 18th Birthday.  He said
“America” fought for Vietnam and now my Son fights for America.”  He met up with
his old platoon from Vietnam in Houston after 30 years.  Not his Company but his
Platoon of brothers.  I introduced him to Bill , who just arrived and we saluted each
other and parted.
Bill and I stopped at Alexis’s in Batavia to have a drink and some food.  I knew I was
in Western NY when Bill ordered a Jameson’s on the rock and the bartender poured
him a three for one shot!  Two of those, the best Beef on Wick ever and we arrived in
Attica.  The house was left the way it was when Mom left it in an ambulance.  Bill
wanted me to see the urine soaked bathroom.  Everything smelled of urine in the
bathroom.  In her bedroom was a gallon container of urine that she used at night
rather than struggle to get to the bathroom.
I cleaned it all up a bit and decided to sleep in her bed.  I kept tossing and turning
all night.  If I awoke I couldn’t tell what time it was because the street lights lit up the
room so much.  At around 5 am the neighbor let her dog out and he started barking
right next to my bedroom window. Needless to say I did not get much sleep.  The next
morning I went up to shower and peeked in my old room where I would have stayed
if Mom had been home.  She had it all decorated with 4 cute Christmas dolls for me.
The first visit was depressing.  Attica countryside in the Fall is bleak, dismay, gray,
and COLD.  I stopped at the local Silver Lake restaurant in Warsaw for a $5.89
Breakfast that consisted of two eggs, 5 slices of bacon, toast, country fries and a big
glass of orange juice!  When I arrived she was in the dining room.  It took me a while to
locate which wheelchair my Mother occupied.  They all looked like Zombies. It took her a short
time to recognize me then we talked while waiting for the food.  She complained that
her bladder was going to burst.  I called an attendant over but she had just brought
her from the bathroom less than an hour ago.  My mother had pulled out her Catheter
the evening before, so they moved her close to the desk so her aggressive behavior
could be more closely monitored.  Now she had a bedpan but is real uncomfortable.
She wants to sit on the toilet but instead they bring a Crane in and hoist her up on
over the toilet when she refuses the bedpan deal.  I try to get her to eat when the food
finally arrives.  I ate some and it wasn’t bad or good.  She had a Hot Chocolate and
some milk then insisted on going to the bathroom .  They gave her a bib which she
promptly stuffed down her pants to use as a diaper.  She insisted she had to go back
to the room and was now feeling sick to her stomach.  I wheeled her in just as she
threw up over her self.  The attendants then took over, put her in the Crane and
allowed her to go the bathroom.  I returned to the room to find her back in bed and
moaning so I took her clothes and left.  I really felt helpless to do anything for her.
I took her clothes home and washed them but before leaving I insisted they change
her drugs and stop giving her the anxiety pills.
When I returned to Attica that evening I bought a pint of Vodka, a pack of Cigarettes
and went to the Attica Hotel and ordered a Cheeseburger to go with a Manhattan and
a Cup of Chowder while waiting.  I next stopped at Louie’s Lounge for a beer.  Louie
bought me another and asked about Mom.  I told him the situation and he commented
that that was bad for me and Mom but good for him as I would be giving him some
business this Winter.  I ordered a Manhattan then left for the Legion.  I came in on
GI Joe and his wife Red.

They own the Stage House where my old friend Woody lives.
I heard he had been sent to the VA with an illness and after inquiring I found he is in
a VA Nursing Care facility and not able to return.  We chatted and GI Joe bought me
a beer while I was in the bathroom.  Now I had to get home.  Bill arrived from his 18
hour shift just after me and we both sat up and polished off a few Labbat’s Canadian
Beer I had bought.  2:30 AM we retired.  I awoke to a phone call around 11 am for him
but he had been called into work at 7am that morning to guard a prisoner that had
been taken to the same hospital next to the care facility that Mom was at.  I did some
laundry then stopped at the Silver Lake again for lunch before visiting Mom.  This
time I had a nice homemade Broccoli and Cheese soup with a Ham Sandwich Chips
and Pickle for $4.89.  Deer season started today and on the trip over, pickups were all
over the woods while hunters built their blinds and searched for Deer to bag.  It was
another bleak day.

When I arrived  she was much better and after checking with the nurse I discovered
they did stop the anxiety pills and the Darvon pain pills were replaced with Tylenol .
Mom was smiling and joking a bit and while there they served her lunch in bed .  She
ate a muffin and drank two cartons of milk.  Her and her roommate were plotting to
escape in their wheelchairs.  Carmella Foster was only 61 and had Bipolar disease
since she was 12.  She had fallen and broke her hip like Mom but looked close to 70
instead of being two years younger than me!
I recall little of the weeks that followed…I remember visiting her one evening…she kept
talking about they were going to take her to the basementwhere the “others” are kept. She said
she heard the “others” through the wall at night.
One afternoon, Rose, my eldest granddaughter, was driving down from Buffalo so
we met there. I found Mom out in the hall in a comfortable stuffed chair and Rose sitting
next to her holding her hand and chatting. When our visit was over, Rose and I went into
town for breakfast. I remember that as very special.

I ran to Dr Dar’s office where his Nurse Pattie Walsh (she had a crush on me when she
was 12 and I was 16…her sister was my babysitter and I knew the whole family well). Pattie
I need to speak to Dr Dar. He is not in. Tell him the night nurse gave my Mother Adavin
against my strict wishes! She is incoherent again and not eating. I will David.
My cousin Susie, who had been visiting and checking up on her for me, said…get her out
of this hospital. I wanted to but felt her broken hip should heal before I did that but was
looking into a good nursing home in Warsaw and had visited them and put her on the waiting
list.
My last visit before I returned to Arizona, Mom and I had a conference with her medical
“team”. They babbled on about how they might do this or that and the term C-Def kept coming
up. I asked what that was and they said it was a bacterial infection that they were treating with
antibiotics. I wasn’t reassured they were doing what they could.

When I got back to Attica I researched C-Def at the library internet. It was a MAJOR infection
that many have died of. I called the Center for Disease Control in Atlanta and asked for a
qualified Doctor in Buffalo that dealt in infections of this sort. I then called him and
told him the situation and without calling Mom’s Doctor he felt
they were doing what they could.  I returned to Phoenix.
A few days later Susie called to let me know they admitted her in
to intensive care and were treating her with massive doses of
antibiotics so I booked a flight back to stay until this was resolved.
I week later I arrived, she was still in ICU.  After 2 weeks they
returned her to a private room and her brother and his wife arrived
to visit for a few days.  They left but her condition worsened.  I had
made arrangements to get her into the nearby Nursing Home but
before they said they could take her, the Dr called to tell me they
were discharging her that day and that we should meet her at the
home.  I explained the home didn’t have her room ready yet but
the Dr told me he called and there was a room for her.  Bill and I
took as much of what we could from her room in the house to
make her room at the Nursing Home familiar and comfortable.
She arrived there just as we had it ready for her.  They wheeled her
in on a bed and Bill combed her hair (he had been a male nurse
before becoming a Correctional Officer) while we chatted a bit. She
asked what day it was and I replied Wednesday and she said NO,
what is the date, which I thought odd but told her December 17th.
The nurse came in and said we could return in the morning to visit
Bill woke me around 4:30 am to inform me she passed away in
her sleep.  It was her wedding anniversary and the day she died.
It was also the saddest day of my life.
The funeral was in April when we could bury her at the family site. 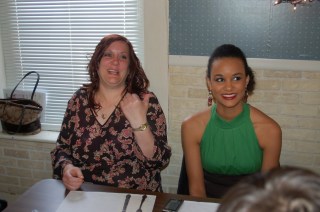