Sunday morning we ate on the patio overlooking the valley. 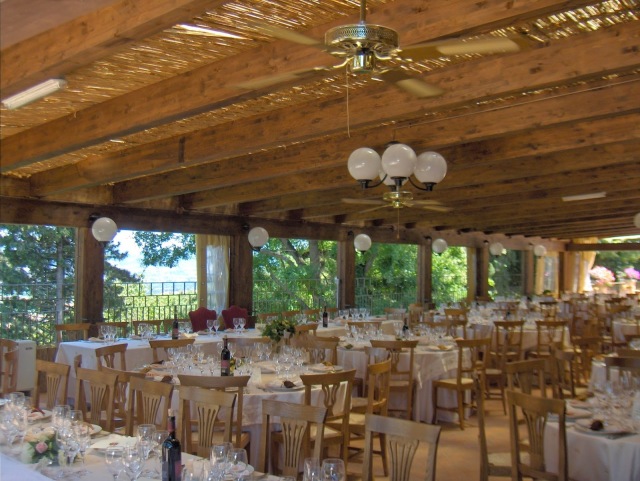 Incredible is the only word to describe it….the view… the breakfast was better than  most buffets I’ve had this trip.  I did two one on ones. Maria was my first.  She travels with her husband, an architect to all over the world including Chicago, Boston, and N.Y.  She works for the City of Madrid , Cultural Center to include the  American Museum in Madrid.

When the Conquistadors first arrived in the American Southwest, they took artifacts of the Anastasia’s and Pueblo Indians in 1500…some of the earliest existing artifacts of the American Indian…and took them to Spain.  The exhibit is at the American Museum but travels because of it being the only one of it’s kind.  Maria travels to the U.S. to facilitate the transfer of acquisitions to add to the museum collection.  She would assist in crating the artifact or painting then transferring it to the JFK transport with the documents and be in Madrid when it arrives. Maria also has restarted taking dance lessons to learn the Flamenco all over again.  She had been classically trained in Ballet and Spanish Dance years ago.
My other one on one, Maria Angeles, was also an employee of the City of Madrid and enjoys travel as well as cooking.  She likes Mexican food and watches a lot of American Movies in order to learn better English.  Both these Marias spoke excellent English and I had no problem understanding them so the hours went by fast.

I was hoping to check my email but have been unable to get on the internet for the last 24 hours and am having withdrawal.  I need to make reservations in Venice soon or I will lose out.  I did get a SERVAS home to stay in while in Florence for Saturday and Sunday after I leave. Now I have to figure out how to get there from this wilderness area.  A Spaniard recommended I take a Taxi for only 80 Euros, then I have to take a train.  The Front desk will check it and let me know tomorrow. The maid threw out my Gatorade bottle I’ve been carrying for over a month from Attica, N.Y.  It saved me so many trips down the hall in the middle of the night…I asked the maid but she didn’t understand so she got the desk clerk but I told her it was my water bottle so she gave me another small water bottle but it doesn’t do the job. Nice gesture.
This afternoon we had a nice lunch on the veranda.  The salad in Italy is similar to Spain.  Some fresh greens, with olive oil, vinegar (balsamic), salt and pepper…never any other dressing. Great lunch.

Siesta, then one to one with Carlos A and Javier. Carlos A is a lawyer specializing in Family Businesses and travels to Chiles and other countries to give presentations on protecting your assets.  He took a cab here from the Rome airport….2 hour trip.  He is 38 and dates a 16 year old. Later I found out that was his humor.

Javier lives at home and is an accountant for the Community of Madrid overseeing 16 department budgets and allocating the money according to their needs.  He has run 15 Madrid Marathons and very seldom every leaves his beloved city of Madrid.
Ann Black worked for CBS for years traveling all over the world with crews doing interviews with Barbara Walters.  She has had two husbands and is a widower.  Her last was twenty years older than her and she is a little older than me.  She smokes Indian cigarettes and has done this program twice.  When she leaves, she is a guest of her daughter’s fiancé’s family in Italy. She was born and grew up in New Jersey but doesn’t like to admit it.  She lives on the upper East Side of NYC.

Elle is a writer  and teaches journalism. She is from London and just did a presentation in Pakistan about the treatment of women by the press.  She won a round the world trip for writing an essay on why she wanted to travel around the world.  She was 23 at the time and while traveling, wrote reviews on the kebobs she ate in the countries she visited and on the sex she had.

Tricia, Allen’s daughter, is a Special Education teacher from Winnipeg.  Allen is a herbalist and has traveled the world but lives in Winnipeg.

Marie is a Special Ed teacher in Toronto.
Christine our Master of Ceremonies is from Vancouver Island and grew up speaking English and German.  Now she speaks Spanish and Italian and has a degree in tourism.  She related a story about swimming in a pool at an exclusive posh resort in Scotland when she was around 12 or 13 years old.  She noticed a lady in the changing room with a leopard patterned swim suit then later while swimming in the pool ran into her. While she was apologizing she noticed four black suited men rushed over to see if Princess Diana was OK.

Later in life, when she was traveling Europe with a friend they rented a car for the first time.  While wading through traffic, she noticed the car was wobbling and a motorcycle pulled along side to motion that she had a flat. She pulled over and called assistance but they just told her to change it.  While they  were debating on how to do this, another motorcycle pulled up a short distance away and motioned for her to come over.  She and her friend went over and while the man was telling her he could drive on ahead to a station and get assistance if she would like, another man stole their bags out of the car and drove off on his motorcycle.  They never knew until they returned to the car.  All their credit cards, passports, clothes and money were gone.  It took them 8 hours to file the reports.
Michael  is from London and has been living in Madrid for 5 years.
David and Jo Ann are from Huntsville Alabama , are retired and have done this course before.  David does a great Elvis impersonation.

Franz Josef is from Germany near the Dutch border outside of Koln and has 3 children that are all grown up and out of college.  He works for a company that does software for IBM, his wife has never worked and they travel but have never been to the US. 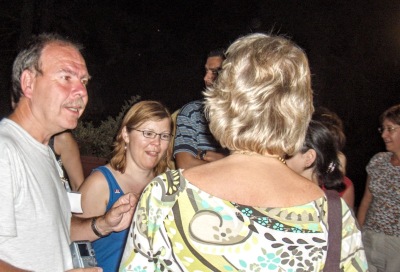 Paulo is from Lisboa Portugal and is a bit reserved.  Most Spanish aren’t outgoing until they have a few drinks.  They will sing and dance but hate getting up to do a speech or to address a crowd.  They are very conservative by nature and though very hospitable, usually invite only close friends and family into their home .
Steve is a project manager near York England and is a big traveler.

Bob Jerome lives in Tampa and is from Boston.  His father was a Boston Policeman.              Jody is from Australia and has lived the last two years in England.  She has taught this course more than once, as have Steve and Bob, and is slowly traveling her way back to Australia.

This week has been non stop from 8 am wakeup call to 1am bedtime.  We have had a fiesta, a Camata party, late night bar sessions and yesterday for the first time we took an excursion. 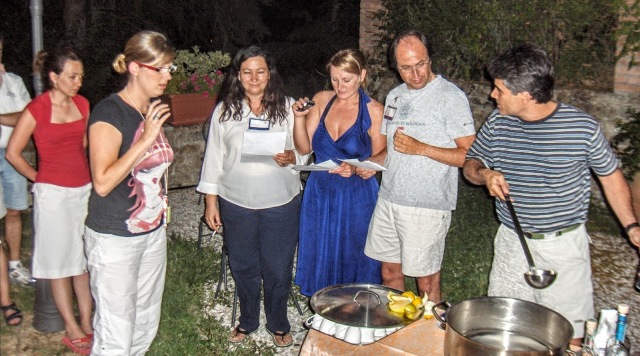 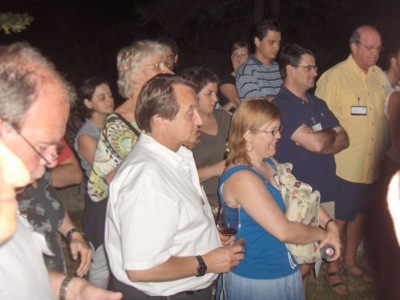 We all took the bus after breakfast to the capital of Umbria…Perugia.  It was lovely hillside ancient city that still has a lot of it’s medieval charm.  I went to the National Gallery of Umbria and saw both a contemporary graphic art exhibit as well as 11th-14th Century Monastic Religious art that was really great.  I don’t care for religion but the art by these monks was fantastic.  I then visited an Etruscan Well from before the birth of Christ, had some Gelato and Perugian Chocolate. 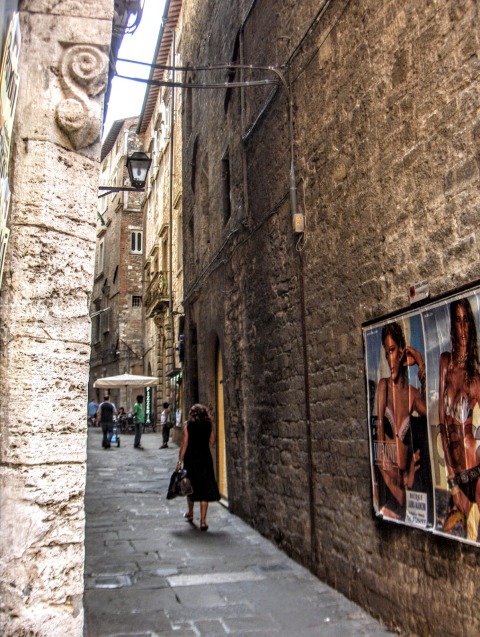 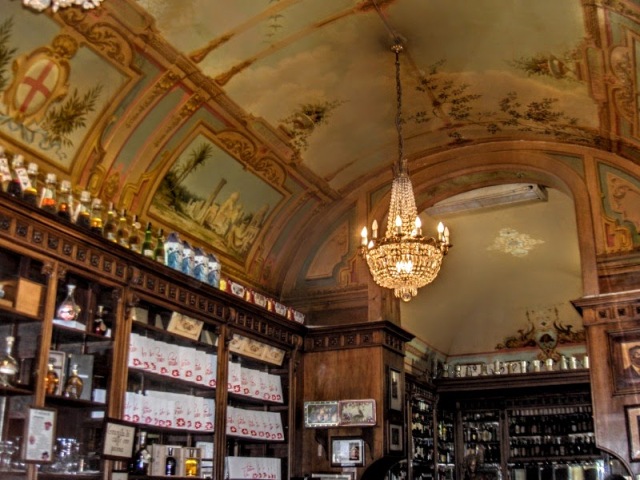 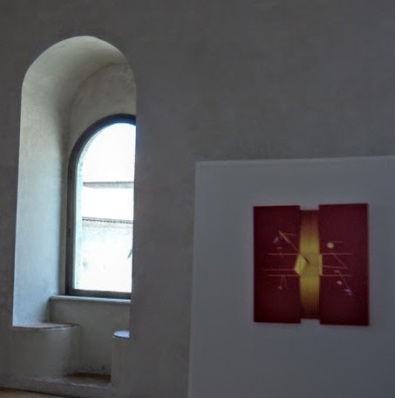 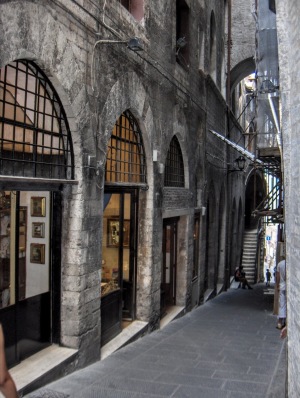 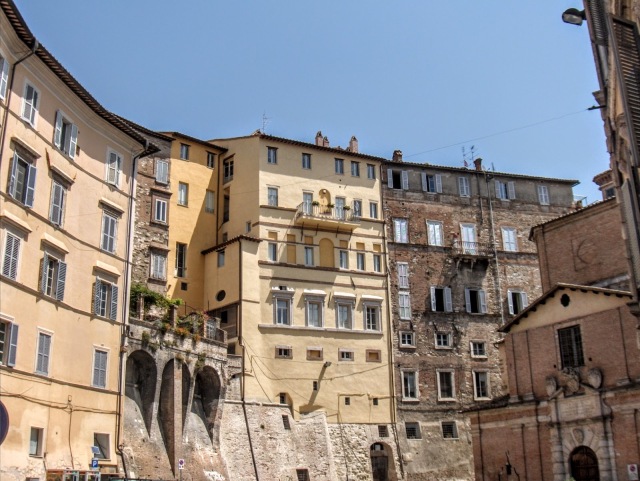 I did check my email at a Café to find my SERVAS host in Florence reneged on me and was being forced out of their home.  My requested reservation in Venice had been denied so I had no where to go after school.  I quickly booked a room for 3 days in Bologna.  This was my original plan to stay there and travel to Florence and Venice on day trips.
We are back to work today, Thursday, and leave Saturday after breakfast.  This week went fast and was so tiring that it was hard to keep a journal. I remember giving a well received Servas presentation as well as lots of one on ones.
The night before we left, Pablo gave me his report of my broken camera for insurance and informed me that the bus couldn’t drop us off in the village so he called a cab to pick us up after graduation ceremonies.  The last day, we had our group photo taken though most of us could barely keep out eyes open.  The party went until 3:30 or 4 am with Tequila being freely poured.  I retired at 2am. 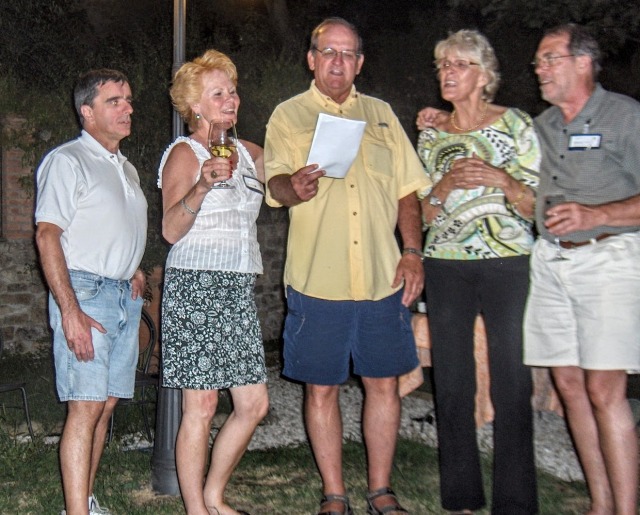 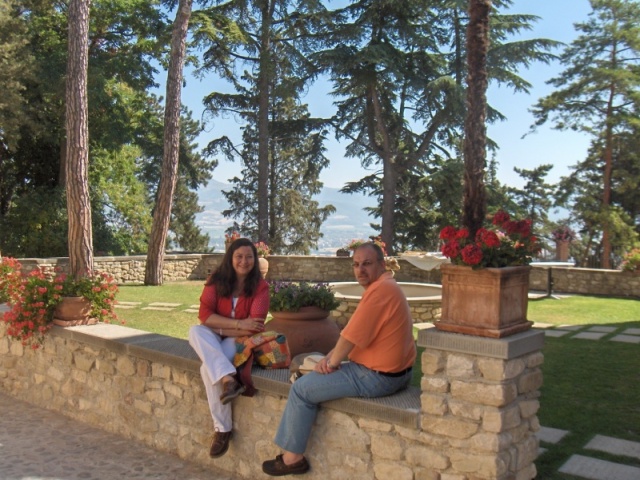