Skip to content
Five-thirty in the morning is new to me but I was packed and ready when Don showed
up at my door to drive me to the Phoenix airport for my departure to Miami then on to
Panama City, Panama.  It was chilly and dark as I loaded my one carry on bag with my
computer on the side into Don’s truck.  He made good time and I was at the American
Airlines counter at 6:30 for my boarding pass, through security, and having breakfast by
6:45.…two more hours before departure.  I wanted to sleep.  I did on the way to Miami
with a row of seats to myself.
The view while landing at the airport was not of the Atlantic beaches I expected but I
could see the rows of skyscrapers and hotels that bordered the beach in the distance.
Phoenix could take a lesson from the food concessions in Miami.  I started with some
great Cuban coffee and pastry (Guava and Cheese).  It would be three hours before
boarding so I would pass the time people watching and reading Joyce Major’s travel book
Smiling at the World.  That is easy to do in this multi lingual, multi cultured airport.
Spanish is spoken a LOT.  The departure schedule reflects that…Cartagena, Caracas,
Bogotá, Panama City, Rio, Havana…I wish I could live here and just fly to a different
Country every other month until I’d experienced them all, but until then I’ll just observe
their citizens.
The flight to Panama was non eventful as was the $30 taxi ride to the City. The heat
was welcome after 15 hours of air-conditioned airports and planes…the humidity wasn’t.
It is a dry heat in Phoenix and that is what my body is accustomed to.  The taxi driver
dropped me at the Hotel Residencia Texas and I met a drunk man from San Diego that
told me not to worry about safety.  He had been here a year and invited me to stop at
Fernando’s for a drink.  I unpacked in my 3rd floor walkup room and ventured out to
Fernando’s.

The streets aren’t well lit and prostitutes, drug dealers and bums are everywhere,
including my new found “friend” and his pals at Fernando’s.  It was a pleasant bar with
an outdoor patio on the street and full of Panamanians as well as Gringos.  I met them
all including Johanna.  She offered me a massage and I bought her a Corona.  We chatted
then after helping me order a sandwich she left to find a paying customer.  Only five
minutes away and $20 but I didn’t want to let the jet lag get the better of me.  She was
gorgeous, young and personable.  Her American friend Tilly owned a bar in Mexico and
Key West before taking his boat from St Augustine to Panama City and falling in love
with Panama.  Tilly lives in a big high rise condo with a roof top pool for  $500 a month
and knows the “local” whorehouses” where you can fuck “Pamela Anderson” for $30.
He will take me there as you never go alone to the local places. His friend John bought
and sold property in San Carlos Mexico and in Boca Del Toro  Panama.  “Irish” came
here three years ago and bought a property in the ghetto.  He renovated it into a nice
three story home but no one else did so he was the only one in the Ghetto with such a
nice home and locals took note.   Three times they busted his door in and one time
threatened him with a knife to which he replied with a Machete and then sold out.
Marijuana can be smoked on the street and someone offered me some when on the
way home to eat my sandwich, but I just kept going.  I couldn’t bring myself to eat the
sandwich of all bread, American cheese , dried ham and I have no idea what the sauce
was.  Plenty of time to enjoy Panama after a good nights rest in my $16 a night
air-conditioned , hotel with cable that includes a porno station.  I left the
air-conditioner on when I arrived but now the room was chilly and there were no
blankets but just two sheets. I later discovered that all rooms came with 2 sheets and
no blankets.  I had a restless nights sleep.  The mattress and pillows had a “musty”
odor with a hint of urine. 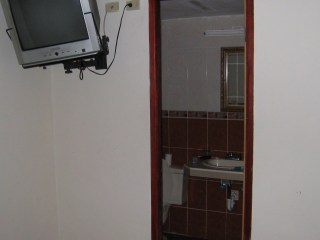 I awoke about 8am as the room was now getting hot.  The air-conditioner  has only
two setting….high cold or off. I heard of a place around the corner that served food
24/7 and headed there.  It was an open air cafeteria that was packed with people
eating and chatting.  I passed by a “refresca”  drink station where fresh fruit drinks
were made to order.  I can live off of those.  I expected to see all kinds of breakfast
items on the buffet at 9am but it was all Panamanian meats, chicken, fried corn bread,
fried bananas, fried polenta, fried fried, rice, empanadas, those things wrapped in
banana leaves, stews, gravies, and things I didn’t recognize.  I told her to give me what
the woman in front of me ordered.  I paid the $1.65 for my plate full of food and coffee.
I found a comfortable table when I realized what I thought was beef stew was all pieces
of liver or heart or kidney.  It had the texture and looks of liver.  If I didn’t have to look
at it or think about it, it would have been delicious. The coffee and fried cornbread was
great.
The Acapulco next door was serving breakfast when I sat down at the counter and
ordered fresh orange juice, café, and ham and eggs.   After two café leches.  I paid my
$6 and left to check out hotel prices.   The Acapulco was $28 and the one next to it was
$20 but both appeared to be full for the month of February.  After a brief siesta, a taxi
took me to Anita’s Inn where I was to spend the next three nights before moving to Fort
Clayton where my Dad had been stationed in the US Army 33rd Infantry Regiment from
1935-1941 before being sent to the war in the Pacific.  I think I’m going to like Panama.
I thought it best to  book  a room for 10 days at the $20 Hotel so I will have something
to return to after visiting Boca del Toro.  Crossing the streets in Panama City is dangerous.
They are all mostly one-way so you only have to look in one direction but the streets can
be four lanes and there are no stop signs or traffic lights on most of them.  As I was
looking for the traffic to slow or go by, I noticed a small black cat under the car parked
next to me.  He waited patiently watching the traffic until it passed then darted across
four lanes.  Who said cats are dumb?
I hailed a Taxi and he drove quite a distance then dropped me right at the restaurant
Trapiche near Anita’s.  He asked for $2 and I knew it was $1 too much but I liked him
and gave him $3.  The directions said the Anita was right down the street 150 meters.
Well that is a football field and a half in length but before I went that far the street  met
another and I didn’t see any building that looked like an Inn.  I went around the corner
and was heading back up the other street when a torrent of rain broke through the skies.
I took cover under an awning with another man, also waiting for something.  I inquired
as to the direction of Anita’s but he spoke no English.  He ran inside the building and
returned with his 7 year old shy son and explained he studied English and might be able
to help.  He was very nervous while I questioned him.  He had spoke English in school
and was studying it but never had a situation one on one with a Gringo.  His father was
proud and he wanted to prove to his father he could do this but between my hearing
and the street traffic and sirens, we couldn’t communicate.  The boy ran into the
building and returned with his mother.  She motioned me over and held the door
open while I talked into an intercom with a neighbor upstairs that spoke English.  I
told her the directions I had and she instructed me to go back to the street, make a
right then another right by the restaurant.  That is where I just was!  I thanked her
and noticed the rain was subsiding so decided to have a Coke across the street in a
café until it stopped.  I was getting ready when the man came up to me and offered ,
with his wife and son to drive me there in the rain!  I declined and after my Coke the
rain stopped and I took off again.

When I arrived at the main street I decided it was best to ask the local shop owners
as they did business with Anita’s guests and would probably know.  I stopped into a
bakery to ask the owner and her husband.  They had no idea but noted a couple of
gringos that spoke English at a corner table might help.  I approached the three of
them and inquired as to the location of Anita’s and one turned and wanted to know
if I had reservations and what my name was….his wife was Anita.  I had walked right
by the place before but this time he phoned ahead and Anita was sitting on the step
to check me in and show me around.
I met a few of the guests, Jim and Ron I think.  They are travelers and have been
here some months as well as having spent time in Venezuelan last year.  We talked for
a while about where to eat , gamble, drink and the sites to see in Panama.  They were a
great help though it was hard to hear them over the din caused by the construction
right across the street…which is right across from my room.  It appears Panama City
is both under destruction and construction.  It is everywhere.  I think there  is still
money to be made here.  Retiring to my un air- conditioned room, I quickly put on
my shorts, short sleeve shirt and sandals.  Now I’m ready to roll

Strolling through the neighborhood the New York Bagel Company caught my
attention. There is internet access, bagels and good coffee. I will return. The Trapiche
offered an open patio to sip a beer and browse the menu.  Joe and another from
Anita’s sat nearby devouring a great meal at a cheap price. I will return.  Back at
Anita’s, I dressed for an evening at the Veneto Casino with long trousers and shoes.
Good luck David!